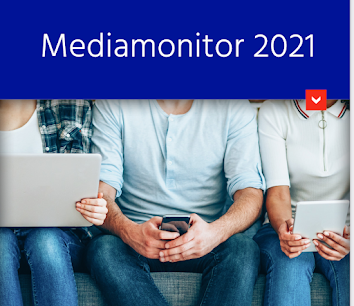 Tipping point in digitization of media use and media concentration

The advent of the coronavirus and the associated measures have greatly affected our society. Our media behavior has also changed substantially. In particular, we used more media because we were at home more. We also consulted more news media brands because we wanted to stay well informed. We have started to do that to a greater extent via digital channels. But are these changes of a permanent nature? And are they taking place among all target groups? To what extent are media companies responding to this with their policies? The Mediamonitor 2021 shows that three underlying trends characterize the changing consumption and (partly) determine the strategic choices of media companies.

The media sector was more than satisfied with the rising consumption of traditional media channels after years. In times of corona, people watch and listen to more television and radio channels. News and current affairs programs are popular, and are relatively little consumed deferred. However, this appears to be mainly caused by the age group of 65 years and older, who still like to watch not only news but also fiction linearly. Young people up to 34 years of age are watching less and less linear television. Of the total time they spend behind the television screen, only 50 to 60 percent is still spent on linear television. Listening time and reach of radio stations is also declining in the group aged 50 and younger, while it is quite stable or even growing across all Dutch people. Both watching and listening among young people is increasingly taking place via digital channels. This trend also continues in the first half of 2021. It therefore seems to reflect a lasting change in media use, which for the time being is slowly moving from young to old.

The use of video-on-demand continued to grow in 2020; as did the offerings. More and more providers from home and abroad are offering high-quality content. The content is watched at the moment one wants it, but live streaming is also on the rise. Digital audio services-on-demand are also on the rise. The number of providers is also growing and people are increasingly willing to pay for content. In 2020, the previously initiated growth spurt of podcasts continued. The growth among young people has slowed down considerably, but there is still plenty of growth in the middle age group. We also see this in the video segment. Watching video content on demand and listening to audio content on demand has become mainstream in 2020 and is widely distributed across all ages. Only the oldest group is still slightly behind here.

Whereas in the past there were clear dividing lines between media, we now see that most (larger) media companies are offering cross-media products. Publishers who have traditionally been providers of the written word are now getting into podcasts en masse. This is logical given the nature of the content they create. Magazines and newspapers are increasingly read digitally and television channels are launching new formats online first. News media brands are well found both online and via social media. This means that the dividing lines between medium types are blurring and it is becoming less relevant where people came into contact with the brand. Media companies are responding by positioning their media offerings under one recognizable brand. After NPO and AD, in 2021 this will also apply to NRC and RTL.

Dutch Media companies are in a tipping year

These trends in media consumption herald the tipping point year in the digital transition. Newspapers are well established digitally and broadcasters are increasingly finding the cross-media way. Cross-media scale, more paying subscribers and the ability to offer targeted ads to non-paying users who leave their login details could guarantee the survival of Dutch media companies.

At the same time, the pursuit of scale creates the risk of a sharp increase in concentration in the media markets, which could jeopardize pluralism and independence. In 2020, DPG Media acquired Sanoma and media concentration reached a new level. In 2021, RTL Group (Bertelsmann) announced its intention to acquire Talpa Network. After an unprecedented concentration in the publishing sector, a media giant in the field of audiovisual media now seems to be emerging in the Netherlands.

In the Media Monitor 2021 we analyze the background and discuss possible consequences of this concentration. We also provide a number of recommendations for maintaining a healthy media landscape in the Netherlands. In the coming years we will continue to monitor the consequences of increasing media concentration on the diversity of the supply.

About the Media Monitor

The Dutch Media Authority has been monitoring media developments and their effects on the diversity and independence of the information supply for twenty years.

Today the launch of the first Dutch, public online service Viditel will be commemorated in silence.  The service was launched on August 7, 1980 by the Dutch PTT Telecom. The technology was the telecom variant of teletext, in the UK Prestel; in Holland Viditel. PTT Telecom had set aside 40 million guilders, roughly 18million euro, for the project. It was not a success. Yet the service was the beginning of the 24/7 economy with James Telesuper and later Girotel from the Postbank. 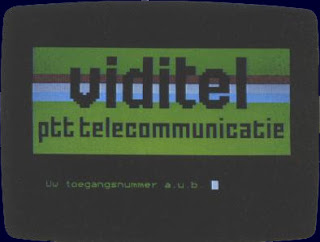 The launch was done from Sneek by State Secretary of Transport and Water Management Neelie Kroes. In The Hague, where the press and videotex studios were present, all the lights went out as television and some photographers switched on their equipment. Was this an omen for success?

Want to know more about Viditel and its successors, read the blogs on https://buziaulane.blogspot.com

Talking to machines in their language

On 10 March, the web archivist of the KB National Library of The Netherlands placed a call on Twitter for a copy of the first Dutch-language novel, Roes der Zinnen, published on the Internet in 1994. The novel is no longer available on the internet, but it would still be available on a floppy disk. A search for the floppy disc was short-lived, as it was stored in my private E-media collection (CJB). A search for a floppy disc player took longer. But on June 25, 2020, the content of the floppy disk was transferred to the Web Archive of the Koninklijke Bibliotheek.