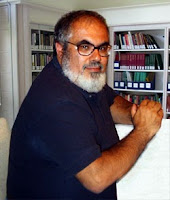 Mauro Francaviglia was born in Torino, on 22 june 1953 and passed away in Cosenza on 24 June 2013. He obtained his degree in Mathematics at the University of Torino in 1975 and he was a Full Professor at the University of Torino. He has held this position since 1980, when he was 27 years old.   His scientific interests covered a wide range of topics, including the application of Differential Geometry in Mathematical Physics, Classical Mechanics, General Relativity and Field Theories, Calculus of Variations, Symmetries and Conservation Laws, Quantization and Thermodynamics. Over 300 lectures held at various Institutions in Italy and abroad. He directed several national and international research projects.

Author of over 250 papers, three monographs, 11 encyclopaedia long entries, Editor of 19 volumes of Proceedings and Director of two CIME Courses. He organized 20 national and international conferences, among which several national conferences in General Relativity and the World Conference GR14 in Florence (1995).

I had the luck to know Mauro Francaviglia and to work with him in the EU project SCIENAR. I am sorry to hear about his death. I had hoped to meet him again during the Bridge conference in Enschede coming August.
With him a mathematician by discipline, but a lover of art has passed away. May he rest in peace and  I wish his wife Marcella Giulia Lorenzi all the best. Have a look at the final presentation, which he gave in the framework of SCIENAR Mauro:
http://www.scribd.com/doc/40744260/Overview-project-SCIENAR-by-Dr-Mauro-Francaviglia-Universities-of-Calabria-and-Torino-Italy
Gepost door Jak Boumans op 4:22 PM 0 reacties

I could start this blog posting with a sexist sentence: she is young, she is pretty and she is smart. But from now on she will be unique for her new position in robot ethics in Australia. Dr Christy Dena has been awarded Australia’s first ever digital writing residency to explore robot ethics at Queensland University of Technology's using high-end technology suites like The Cube, the world-leading, large scale, high-definition interactive display environment. She will be the creator of a project called Robot University. Unusual is also that as a writer in residence she will be assisted by a team of technicians and artists and draw on research done for inspiration. There is a lot of expectation as she will have to take the science fiction of Asimov in six months to another level.


It is surprising and interesting to see that Dr Christy Dena has been selected. Her background could be qualified as one in digital media, ranging from cross media to transmedia. I met her at a conference in the North of Sweden in 2007, where we had a long and fierce discussion on cross-media and its implications. After that she took up an invitation to visit The Netherlands and present a guest lecture at the NHL at Leeuwarden. In 2009 she wrote her thesis on:  Transmedia Practice: Theorising the Practice of Expressing a Fictional World across Distinct Media and Environments. Superficially this could indicate a future in cross-media and more specifically in gaming. But her interest is deeper. In gaming she is confronted with robot characters, which are representations of present and future life.


Robots are becoming part of our lives. If you are really ahead of the troops you have a robot hoover or a robot grass mower at home. Employees in car factories have become familiar with robot machines. In warfare and surveillance drones are becoming more common. In research robot are used to collect for example ocean data, while in classrooms lectures are being delivered and foreign languages taught. Of course robots themselves are subject to cognitive studies. In health and medical healthcare robots are used in difficult surgical procedures.


We are presently in the phase of domestication of robot machines. They are still steered by people. But with drones the discussion has already started on the decision capability of drones; they recognise an object and start automatically to fire on it. This type of decisions leads to ethical discussions. And as robots are becoming part of our society and will assist people at the bedside, we should be sure that they harbour some good characteristics and do not start beating up slow pensionados. 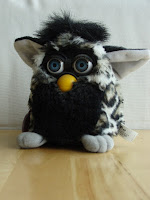 But robots have also started to penetrate in entertainment. Besides using them for edutainment, we have seen customer robots like cuddly Furby (left) and Aibo (right) to play with. More robots have appeared in games and are used as good and bad robots, following the division of a black and white world. In this environment Dr Christy Dena will do her work. In fact she takes it as her task to challenge our perceptions of robots by exploring our responsibility to build ethical and mutually-beneficial relationships with them.


It is not entirely surprising that she as a game pro was appointed to this positio. Yet its a heavy assignment, which will be in good hands with her and worthwhile to be followed closely. Of course her mission will be really successful if the Robot University is eventually started and she becomes a professor.
Gepost door Jak Boumans op 12:51 PM 0 reacties