Welcome to the 6 Day Creativity Boost.

Hi everyone! My name is Adam Montandon and I am trying a new experiment to boost your creativity. I am a teacher in Denmark, and I want to share my lessons with everyone, so I am testing out something completely new!

Its been my mission in life to help people boost their creativity, and now I want to boost yours, in just 6 days!

The festival is organized by the ”Sapientia” Hungarian University of Transylvania, ”Babeş-Bolyai” University and University of Art and Design from Cluj-Napoca. In Romania, the festival is the first one which declares itself as the first competition forum of the Romanian and European Cinema Schools. Already in its 6th edition, this event unites a number of over 200 students from Eastern Europe of no less than 10 film schools.

Students can submit films in competition in five categories: extra-shorts (1-3 minutes), short fictions, animation, experimental and documentary films (the maximum length of one production may not exceed 20 minutes). Please send a 90 min. Best Of presentation from your University/Festival, and also films for competition before November, 1 (date of post).

This week the annual Frankfurt Book Fair will be held again. Some 7.000 exhibitors from 100 countries will be there. Some 280.000 visitors from 129 countries are expected. They will be looking for books and nothing else but books, from literature to scientific books, from fiction to non-fiction.


Over the years the fair has changed. Was the fair a necessity to acquire new to be translated books formerly, now e-mail and skype have made negotiations possible on a daily scale without travelling.


But also the product book has changed. The book portfolio exists of printed books formerly, now the offer has been expanded with electronic books. This year also the apps have been added as a product and as marketing tools. This also shows in the booth arrangement as, there are not only booths for printed or electronic books, but there were also booths reserved for integrators and apps developers.


This change has had a long  and slow start. In 1970 the book industry started to change the process of typesetting and page make-up aided by computers. In 1985 the CD-ROM was introduced as a mega book, ready to store a 25 volumes encyclopaedia. For the Encyclopedia Britannica it was the beginning of the end, which took place in 2012, when the decision was taken not to print an encyclopaedia anymore.


This whole process was characterised as electronic publishing. The term did not only entail the computing of the production process. But on the Frankfurt Book Fair 1993 the term was expanded to electronic products, derived from books, in the EC report New Opportunities for Publishers in the Information Services Market (1993, Consulting Trust). The electronic products were embodied by the first Sony e-readers and minidisk e-books. In 1996 the term electronic publishing was canonised with publishing of EC Electronic Publishing: Strategic Developments for the European Publishing Industry towards the Year 2000.


Electronic publishing started to penetrate into the realm of readers in 2006, when the first e-readers with e-Ink screens reached the market. Besides, the publishers were eventually forced by Amazon to publish e-books. And e-books are doing well. E-books can now be bought, hired and streamed to the screen. 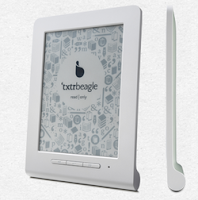 And this is only the start. The big bang is still to come and the first rumble can already be heard. At the Frankfurt Book Fair an e-reader has been announced for TEN euro (10 euro). Dependent on the quality of the screen and built-in facilities e-readers cost from 99 to 350 euro. But the German txtr beagle can keep the price so low as it did not put in high-tech in the device. The e-reader contains facilities built into smart phones. So no wifi, but blue- tooth to transfer a book. An Android app takes care to put the books into place. Users of the beagle do not need cables to connect to plugs, but just two AAA batteries which will keep the reader going for a year. And when they are empty, just change them. The txtr beagle has a 5 inch screen with a resolution of 800 x 600. The device weighs only 128 grams, including batteries. The memory is 4Gb. The e-reader can handle epub and pdf.  The German company presented their own e-reader at The Frankfurt Book Fair 2009, but the e-reader never reached the market. But having been acquired by 3M, a new e-reader has come off the drawing table, ready to go into mass production.

UPDATE 14 October 2012 Just saw an interview on YouTube in which the announcement was made for a Kobe Mini e-reader. This will cost 80 euro in The Netherlands; 79 US dollar in the US.
Gepost door Jak Boumans op 10:24 PM 0 reacties

All 301 movie theatres and cinemas in the Netherlands are equipped with digital projection equipment since 12 September. No less than 730 (of which 373 with 3D facilities) of the total of 795 cinema screens in the Netherlands were ready for digital reception thanks to e project Cinema Digitaal (Digital Cinema). The Pathé cinema chain, Utopolis, Euro Coop and some independent theatres digitized independently. Digital Cinema is a unique public-private digitization program initiated by the Dutch Association of Cinema Operators (NVB), the Dutch Association of Film Distributors (NVF) and the EYE Film Institute Netherlands. This collaboration made collective transition from analogue to digital possible and prevented the forced closure of small movie theatres and cinemas.


The technological transition in the cinema industry requires a high investment for many movie operators, which would have been financially unfeasible individually. In Digital Cinema the scale of digitization is based on the principle of solidarity between commercial cinemas and movie theatres. So now the cultural agenda of national and international movies can be kept. And new opportunities can be explored such as the special soccer ball viewings. During the European Soccer Championships 2012 many games were distributed to theatres and cinemas. Also a well known musical duo ayed in a theatre and the show was streamed to 55 cinemas, filled with fans.


The first installation took place on July 20, 2011. The transition period has lasted 14 months. The total cost of the Digital Cinema project is € 39 million. The film distributors active in the Netherlands - 20 independents and 6 American major studios – bore the bulk of the cost (70%) of the Digital Cinema project. These consisted of the one-time replacement of 35mm projectors and the savings they realize now producing celluloid film prints not more is needed. Digital Cinema was co-financed by the Ministry of Economic Affairs, Agriculture and Innovation (€ 3,000,000 from the Programme Implementation Agenda ICT-Bellied/PRIMA) and Dutch Film Fund (€ 2 million). The total film sector in the Netherlands invested in short period over € 55 million in the digitization.


Due to the project Digital Cinema of the Dutch cinema industry, celluloid film (35mm film) has virtually disappeared from the cinema from 12 September 2012 onwards.


Last year the Dutch movie industry offered employment to 20.000 people through 8.000 companies. In the past four years the turn-over of the Dutch movie industry has risen 80 per cent. In a recent study by SEO it was concluded that there is a relationship between the showing of Dutch movies and the number of people visiting cinemas. The cuts in production budgets announced by the Dutch
Film Fund and Public Broadcasting companies will reduce the production volume by one third, according to the report.