BPN 1348 The scope of eGovernment

I am back from Bahrain. It was not because of the sand storm on Thursday, but the assignment to chair the 2009 eGovernment Excellence Award jury was completed. The jury reached a final winners list on Wednesday evening. 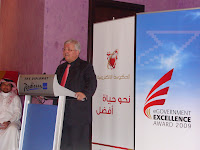 The jury deliberations were over, but the Bahraini have a nice tradition of thanking the jury members. An official dinner was arranged on Thursday evening. All the jury members, the staff and the officials of the eGovernment Agency were present. The dinner was presided over by sheik Ahmed Bin Ateyat Allah Al Khalifa, the minister of Cabinet Affairs.

Once the sheik had arrived, a few speeches were made. I was asked by the eGovernment Agency to say some words (see photograph). Of course, thanks were in order for organising the jury event as part of the eGovernment Contest. After that a ceremony, which looked like graduation day, was started up. Everyone was called up to come forward and receive a certificate and a gift in red velvet (red and white are the colours of the flag of the Kingdom of Bahrain).

Looking back at the second edition, it certainly was different from last year. The electronic jury system was different and the jury members worked remotely. So contrary to last year I did not see the jurors often. In fact I saw them at the opening session and on decision day. I received telephone calls and messages with questions at the office of the eGovernment Agency or at the hotel. It led to a morning message and a daily wrap up message.

There was some joking about my presence in Bahrain. Last year I stayed here three weeks. This year I have stayed there two weeks. So a prediction was made jokingly saying that next year it would be just one week or worse Skype.

It was also interesting to have an Omani lady and two Saudi officials in the jury. As they are preparing eGovernment contest in their respective countries, they got an experience through participation in the jury from the inside out. The Saudi plan to have a national contest in November, while the Omani lady has been charged with the organisation of a national contest as well as a GCC (consortium of Gulf countries) contest. Both have asked to assist them in starting up the contest. Besides at the end of the dinner, Bahraini officials asked whether I was available for the third issue, which solicited the remark, that I only need an apartment in Bahrain and a jallabah.

During the dinner we got into a discussion about the scope of eGovernment. Was it just a cost reduction exercise using the citizen as a data typist or was it to make government more accountable and transparent? Of course all elements are involved. And it is not only the scope but also the state of art of eGovernment. Governments which have just adapted eGovernment are less mature than the governments using a portal with a lot of information and eServices, thus letting citizens browse for information and have him/her do payments online from their home at their own convenience. Of course, it also saves on people handling manual transactions. Transparency of course comes when one can check public spending as well as the voting behaviour in connection with payments. Of course the US and many EU countries have a certain degree of transparency. One of the beautiful examples of creating transparency is the US site Money and Politics by Maplight, which was a winner in the 2007 World Summit Award edition.