The German magazine Wirtschafts Woche brings the item that Vodafone is developing an eBook reader. The article does not have any hard facts about the developer and the type of eBook reader, except that it is a large screen (DIN-A4) for newspapers. Vodafone is presently in the test phase.

To some bloggers the news came as a surprise, but Vodafone has been involved in eReader experiments in Germany as far back as 2004. The project was named Papyrus and involved a project on electronic newspapers and DVB-H. News items were transmitted with DVB-H, the standard for mobile interactive broadcast. In 2004 the first trial was held in Berlin with 200 users. But Vodafone researched also other carriers for DVB-H as carrier for electronic newspapers like an eReader. 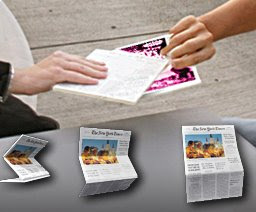 Vodafone did not choose for the e-readers like iLiad and STAReBOOK as Les Echos did. It started working together with Benq, a joint venture of Siemens, in developing the electronic tabloid newspaper. But Benq sunk in 2006 and so did that part of the project. In 2007 the consortium, in which Bertelsmann participated, then investigated other digital paper producers like Plastic Logic (which still has not been launched in 2009). More details on the project Papyrus can be gained from a lecture by Mr Geissler in 2007). In 2008 Vodafone Group R&D commissioned the Linz lab-atelier to come up with an interaction concept for their eInk-Newspaper Project Papyrus and demonstrated it at the Ars Electronica.

So the question is now whether Vodafone is still with Siemens or Plastic Logic. But of course Vodafone can also cooperate with developers who have a small display at present. Like Samsung, which has an A5 eReader named Papyrus. Or like the small German developer txtr which will launch an eReader of eInk Vizplex 6" display at 600x800 pixels in the fall of 2009 for the general consumer market. Of course of interest would be to know who will deliver the newspapers and books. Given the early project association with Bertelsmann, it would be striaght forward to make an alliance with that publisher.

It is interesting to see that there is a battle developing in Germany. T-Mobile has indicated last year that it is developing an eReader for newspapers. Now Vodafone is said to launch an eReader in the fall right at the time, when the small German developer will present its eReader with a 6” display.

Even more interesting it is to see that this fight heats up at a time when Amazon leaves a gap in the European ereader market with the absence of a European version of Kindle. Amazon has difficulkties to get in the European market and especially European telecom market as it will have to negotiate in all 27 countries with telecom companies. The European telecom market is one big fragmented industry. With T-Telecom picking up the iPhone and Android gadgets, it would be logical that Amazon woulkd negotiate with T-Telecom. But then the question still is whether T-Telecom is willing to pay the price Amazon asks.