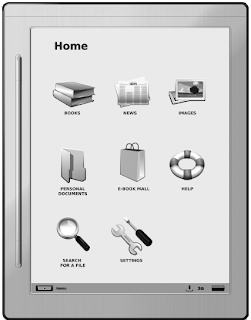 iRex Technologies has confirmed that it will launch a new e-reader, for the time being only for the US market. A few details have been leaked and confirmed by iRex Technologies. The e-reader is the latest arm in the American e-reader market with Sony’s e-readers, Amazon Kindle I and II and e-readers for Hearst and Barnes & Nobles waiting in the wings. With some 4,5 million e-readers around in the US, according to Forrester, the e-reader war will be fought on more than one front.

Officials have confirmed that the spun-off Philips company iRex Technologies will launch their third edition of an e-reader. Irex was the first company to launch an e-reader, called iLiad, with digital paper (and 16 grey scales) and wireless communication in July 2006. The first edition got a cut-down version minus the wireless facility, the Bookwurm. Then a larger screen edition the IREX Digital ereader (10.2 inch) was launched in three flavours. Although there are only a few details known on the third edition e-reader, it is not a cut-down version of the first two editions.

This is what is known about the forthcoming e-reader: 8.1-inch display; 3G wireless connectivity (no carrier announced); touch screen with stylus navigation; fall 2009 release. From the photograph the page ruler, absent in the IREX Digital ereaders series is also back. The new e-reader will only be offered in the US, but a few very essential details such as preferred online e-book seller, 3G network vendor and price has to be established.

One thing is sure. Irex likes to compete on the size of the screen and the 16 grey scales. The Sony e-readers, Kindle versions and the Barnes&Nobles one. The new Sony e-readers have screens of 5 and 6 inches, The Kindles have resp. a 9.7 and 10.2 screen, while Barnes&Nobles will carry the Plastic Logic e-reader with a screen based on letter format (8,5 x 11 inches) iRex sits in between with the 8.1 inch display.

The new iRex e-reader will have a 3G facility on board, not a wifi like their first iLiad had. A 3G vendor is not known yet. The Kindles work with Verizon, while the Plastic Logic, and implicitly Barnes&Nobles, has teamed up with AT&T.

What will the price be of the iRex device? iRex products have been expensive from the start. And the products are still top of the bill. Speculation on the new iRex 8.1 inch screen e-reader says that iRex aims at less than 400 US dollars. It might be even around 350 US dollars and be face to face in competition with the Kindle.

It is clear that iRex Technologies tries to get into the US fray, as it takes more effort to sell e-readers in the underdeveloped markets of Europe and Asia. Soon the US market most likely will double its marketing statistics from 4,5 million e-readers. Hopefully iRex has learned the lesson that the real fight starts not with the e-reader and its technology, but with the full package: the e-reader, the portfolio of online e-book and newspaper titles, the online e-book service (open or exclusive) and the 3G service (open or exclusive).