A smile came to my face, when I read the news item that the Roman Catholic pope Benedict XVI had been admonishing priests to start using internet, start writing blogs and start twittering. So far this pope has not really stimulated the nouveautees, but he seems to be serious now. As I studied theology/philosophy at Notre Dame Seminary in New Orleans (La.) years ago from 1966 till 1970, I have of course an opinion about priests and new media. I think that priests should have been in this business already a long time. After all communication is their core business and especially wireless communication or communication with heaven. 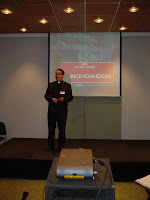 And there have been role models of priests busy with internet, blogs and podcast. In 2006 I attended a presentation of Roderick Vonhögen, a Dutch priest podcasting to a worldwide flock. He started out comparing operating systems to beliefs. In hardware you belief in PCs and Macs an in software in Windows or OS X and in Western religious circles you believe in Catholicism and Protestantism. One of his statements was stunning: the world is my parish. And of course his iPod is the virtual pulpit. With his podcasts he attracts thousands of listeners, which is much more than the parishioners he sees during the week.

His philosophy is rather simple. The Roman Catholic Church is a global community. Using an IPod he can reach many members of this community, in fact more than his usual parishioners. He shares his personal experience and does not have to worry about time and place. In the meantime he has started a daily breakfast show The Daily Breafast, a light program about Roman Catholicism, culture, books, movies and mythology.