The Saturday of the Europrix is always the most interesting day of the festival. All the nominees get 10 minutes to tell about their nominated entry. It is not much time, but if can’t sing it in this short time, you can’t win the Europrix.

This year like last year the TU Graz offered the venue. The room was like an aquarium with lots of glass; and as the day was very sunny, it became like a sauna. But sometimes there was relief at hand, when there were some hilarious presentations. A good laugh is the promo of the car Lada Niva: Roscosmos Edition 1-3 The most hilarious one was by the producers of the game Liquorious; the game itself is one big laugh, but the presentation of the producers was a performance in itself.

There were some remarkable facts this year.
Finland and the Netherlands did not have any entry nominated. From the beginning of the EUROPRIX in 1998 Finland and the Netherlands has always nominees in the list, if not winners. What does this mean? Are other countries in Europe overtaking and catching up in quality content and good design? One constant fact is the French school Ecole de Gobelins, which has had winners ever since they started to participate.
Most of the presentations were professional and many of the products had a business plan. When the Europrix started at the turn of the last century, actually in 1998, technical and arty skills were predominant. Producing a business plan was not in the mainstream. But it looks like we are at a turn in the education, where also attention is given to selling yourself and the project. Another remarkable point was the use of technology. Over the years we have seen many technologies pass. But this time I also noted two project using the Anoto digital pen: one was used in an educational environment of primary school, while the other one was used in a scientific environment for mathematical formulas.
The productions are also professional. This year two women entries were remarkable. One about breast cancer and one about women trapped in the time machine. The entry on breast cancer got a special award from the Austrian TV (ORF), but the managing director missed a chance by not offering a time window for broadcast. The third entry was impressive by treating the sorrow of a son about his father’s death. All these three entries are woth broadcasting.

The climax of the festival is always the award ceremony. This time it was going to be held in the mountain, in the middle of town. A big Dom has been hewn out of the stone. Normally the Dom im Berg is used as a disco. For the winners a majestic stairways (thanks for the photograph Cai) leads them to heaven, Dom im Berg. 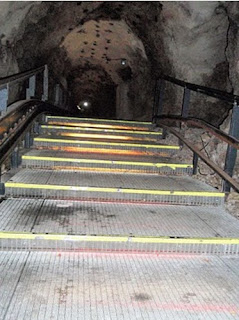 The winners of the Europrix 2010 are: 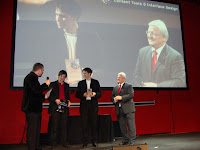