Young People use Internet and Mobiles for Social Good
Do you use social media to do good for your community and for your own future? Do you use blogs and vlogs to raise critical questions? Do you create websites or mobile apps that fight discrimination, hunger or diseases? If yes, take your chance to show that you are at home in digital and social media and know how to bring about positive development, be it in your neighbourhood or in another country: Submit your new media project to the World Summit Youth Award (WSYA) and win the chance to meet engaged Youth from around the world and network with representatives of NGOs, governments and media!
The WSYA is an annual award and a network for young people, under 30 years of age, using the internet, mobile phones or other digital media to put the United Nations Millennium Development Goals (MDGs) into action. The MDGs were set in 2000 by the UN to prompt member states and civil society to fight poverty, hunger and disease, inequalities, lack of education and environmental degradation.
Starting May, 2nd, and until July, 15th, you can submit your product to this international competition at www.youthaward.org in one of the six WSYA categories:
1.         Fight Poverty, Hunger and Disease !        4.         Create your Culture !
2.         Education for All !                                        5.         Go Green !
3.         Power 2 Women !                                         6.         Pursue Truth !
Three winners and two runners-up for each category will be selected by an international jury of young ICT experts. They will evaluate the projects in two rounds of online judging.
Being a WSYA Winner, your project will be elevated to a new level. All winners will be invited to the WSYA 2011 Winners’ Events in Skopje, Macedonia. This is where they will have the chance to present their projects on a world stage. Aside from the award ceremony, meetings, discussion rounds and workshops will provide the space to exchange ideas and make friends with engaged youth from all continents.
Representatives of governments, NGOs, media and other renowned experts in the field of ICT for Development will take part in these events and be available to the winners. This is a unique chance to boost your project by getting access to the WSYA network. The Youth Award network offers you the possibility to develop your project, refine your business plan or even find sponsors. 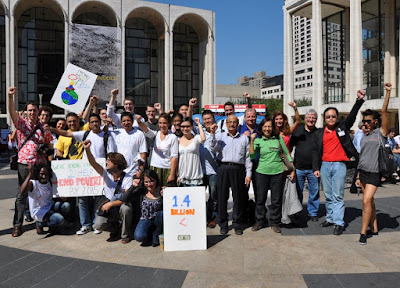 World Summit Youth Award winners 2010 at the New York StandUp meeting in New York in September 2010
About the World Summit Youth Award (WSYA)
The WSYA selects and promotes best practice in e-content and new media, demonstrates young people’s potential to create outstanding digital content and serves as a platform for people from all UN member states to work together in the efforts to reduce poverty and hunger, and to tackle ill-health, gender inequality, lack of education, lack of access to clean water and environmental degradation. The WSYA is organised as a follow up activity of the World Summit on Information Society (WSIS) and its action plan towards the year 2015. The Youth Award is organised by the World Summit Award Network for the fourth time after 2005, 2009 and 2010.
WSYA is supported by the UN Global Alliance for ICT & Development (UN GAID), the John S. and James L. Knight Foundation, the Internet Society (ISOC), INTEL, the telfree Group, the Fundação para as Comunicações Móveis (FCM) and the Layla Fakhro Foundation.
Website: http://www.youthaward.org
Social media: http://friends.youthaward.org/ http://www.facebook.com/youthaward | http://twitter.com/#!/youthaward
Gepost door Jak Boumans op 10:20 AM