The history of digital media (mind you not digitised media like e-books) has been the subject of many a posting on this blog. There are several posting complaining about the lack of heritage of digital content and installations. Hardware is being saved on a regular basis, but not so with content related artefacts such as e-mail correspondence, databases, sites and these days blogs, Facebook messages and tweets. This week I saw support from an unexpected source. 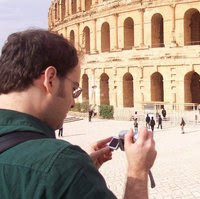 My dear friend Andy Carvin (see photograph) drew my attention with a Facebook message to a study of Hany SalahEldeen and Michael Nelson at Old Dominion University in Norfolk, Virginia, who checked to see how much of the material of the Arab spring was still alive and quantified the material or what was left of it. And the result was startling. In fact they demonstrated that history is vanishing from the web, especially as recorded by social media such as Twitter. The statement is proven by a study on the Egyptian uprising and other world events. The researchers claim that 30 per cent of the recorded history shared over social media has disappeared. The study was highlighted in a recent post by the Physics arXiv blog.


The uprising in Egypt started on 25 January 2011 that eventually led to the overthrow of the country’s president and the first free elections. In this uprising social media were paramount in organising protests and spreading news.


By now curators have finally started to store the calls for protest and news items. Not surprisingly, a significant proportion of the websites that this social media points to has disappeared. And the same pattern occurs for other culturally significant events, such as the swine flu virus outbreak, Michael Jackson's death and the Syrian uprising. In other words, history, as recorded by social media, is slowly leaking away. 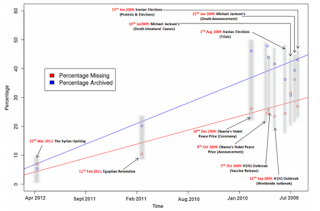 SalahEldeen and Nelson looked at six significant world events between June 2009 and March 2012. They checked the tweets about the events and looked for URLs they pointed to, to see whether the content was still available on the web in its original form or in an archived form.


And yes, they found an almost linear relationship between time and the percentage lost.  No less than 11 per cent of the social media content had disappeared within a year and 27 per cent within 2 years. Projecting these results to important daily social events, SalahEldeen and Nelson say the world loses 0.02 per cent of social media material every day. You can wave this percentage away and point at the many irrelevant gs, messages, tweets and retweets, but it also means 0,02 per cent of the relevant social material. These can total up to 30 per cent of the recorded history shared over social media


It’s not clear from the research why the missing information disappeared, but it’s likely that in many cases blogs have simply shut down or moved, or news stories have been archived by providers who charge for access (something that many newspapers and other media outlets do to generate revenue).
Although the Virginia researchers didn’t deal with the cause of disappearance as part of their study, a related problem is that much of the content that gets distributed through Twitter—not just websites that are linked to in Twitter posts, but the content of the posts themselves—is difficult and/or expensive to get to. Twitter’s search is notoriously unreliable for anything older than about a week, and access to the complete archive of your tweets is provided only to those who can make a special case for needing it, such as my friend Andy Carvin of National Public Radio (who is writing a book about the way he chronicled the Arab Spring revolutions). Recently an external service called Gnip provides access to the full archive of Twitter content,  which it provides to companies for a fee. And Twitter-based search-and-discovery engine Topsy also has an archive. But neither can be easily linked to for research or historical archiving purposes. The Library of Congress also has an archive of Twitter’s content, but it isn’t easily accessible, and it’s not clear whether new content is being added.


Besides not carefully curating digital content in practice, digital media producers and consumers show any interest in saving digital artefacts. Recently my business partner Hans Sleurink pointed me to an analysis of Neil Postman in his book Technopoly. He is convinced that technology has served human values throughout several historical development stages. But in the 20e century technology has become so dominant that a reversal has taken place. Technology increasingly determines what human values are instead of supporting. In other words: the printing press brought democracy; internet brings ubiquity, but per se not respect, as signs and bracelets bearing the message of respect spring up all over.
Gepost door Jak Boumans op 2:49 PM