Every competition has its winners and losers. In the European competition Cultural Capitals 2018 the Maltese capital Valletta and the Dutch city of Leeuwarden were the winners. Of course the capital of the Frisian province was very happy. In The Netherlands it had left the cities of Maastricht, The Hague, Utrecht and Eindhoven behind. All those cities had like Leeuwarden put together a bidbook (see bidbook Leeuwarden).


Reconstruction Philips Pavilion Expo ‘58
In all those bidbooks you will find fascinating plans. The Eindhoven bidbook contains a plan to reconstruct the Philips pavilion of the Expo ’58 in Brussels and rebuild. The Foundation Reconstruction Philips Pavilion wanted to let the building arise in the Eindhoven neighbourhood of Strijp-S for 8,5 million euro. The reconstructed pavilion should serve as a living lab, where artists and designers could make use of the most advanced technologies. As Eindhoven did not win the bid, the municipality will not put up any money for the reconstruction. So the Foundation will have to collect the money itself. It will take a year to get the sum together; otherwise it will abandon the plan for reconstruction. 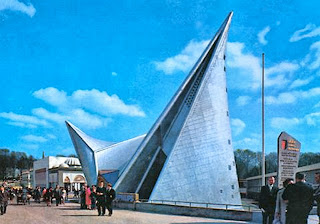 Why reconstructing the pavilion?
You can ask why a building of 1958 has to be reconstructed again. There are pro’s and con’s. One reason against it would be that the Expo ’58 has already a monument in Brussels, the construction of aluminium spheres, the Atomium. But of course the pavilion is a landmark of futuristic architecture. Having such a retro building in the neighbourhood would be a tourist attraction. The pavilion was built by the design bureau of the famous French architect Le Corbusier, but the design was executed by his assistant Iannis Xenakis. However after the Expo ’58 the building was demolished with the permission of Le Corbusier as it had not been designed for eternity. The argument that the reconstructed building would serve as a living lab and as an inspiration to artists and designers is interesting destination, but also an expensive one. The real reason for reconstructing the pavilion should be that the pavilion plus the performance called Poème Electronique marks the beginning of multimedia and the transition from analogue multiple media to digital multimedia.


Starting point of multimedia
In this bold architectural pavilion Philips presented its first large multiple media performance. At the World Exposition of 1958 Philips wanted to symbolise progress and innovation: light, sound, electronics and computing. The idea was generated by Louis Kalff, the art director of Philips. He gave the assignment to the design bureau of Le Corbusier, who involved the Greek architect Iannis (Yean) Xenakis and the French-American composer Edgar Varèse. Iannis Xenakis would design the pavilion, Varèse would take care of the music and Le Corbusier was in charge of the images and the sound and vision.
The ground plan of the pavilion took the form of the human stomach with a surface of 1.000 m2 and a height of 22 meter. The construction technology used was innovative, as it existed of a geometric construction with pipers and blocks of concrete. The interior was empty with standing room for 500 people. 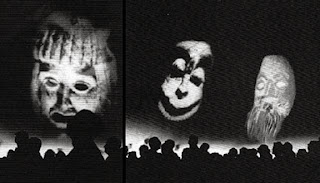 The visitors got to see a slide show with images projected all around 360 degrees, supported by electronic music coming from 400 speakers. The multiple media show named Poème Electronique, lasted 480 seconds and demonstrated the history of mankind in sound and vision with images from nature, masks and old cultures, armoury, children, matures seniors, cities, birth, life and death.
The object of the project was to produce and present a show, in which sound and vision will mix into one entity and offer a gross spacious experience (Gesamtkunst). The spectacle started with the announcement: ‘Philips has designed automatic devices which introduces a new art form with borderless opportunities, namely the electronic cooperation of light, colour, image, word and music in space. The electronic poem shows how our mechanised civilisation strives after a future new harmony.
‘However the cooperation between the artists was less than expected. Besides, the 75 year old Varèse got into conflict with the sound experts of Philips. Yet the visitors left the pavilion flabbergasted, overwhelmed by the images, sounds and technological pinnacles.
The pavilion, which had costed Philips 6 million Dutch florins (less than 3 million euro), was demolished after the World exposition and the creative production sank into oblivion. Poème Electronique was revived in 2005 and could be experienced at a conference in The Hague. The slide projectors were replaced by a few PCs, while the 400 speakers were replaced by a few surround boxes. The 480 seconds long performance can now be seen (but not experienced) on YouTube with a Dutch language introduction and on an English language internet site.