LexisNexis
In 1994, Reed Elsevier purchased one of America's oldest full-text information services LexisNexis. This pioneer had originated from an activity of the IT department of the paper company Mead Data Central. Since 1967 this department delivered full texts of legal rulings to the Ohio Bar Association. In 1970, the Lexis company was founded, that was to distribute legal information online. Later the news archive service Nexis was added. This service offered the full text of newspaper articles, for example, of the Boston Globe and the Philadelphia Inquirer. A great asset to the service in 1979 was the addition of the archive of the renowned New York Times. Thereafter it bought the news archive service Profile of the Financial Times. By 1994 Mead Corporation streamlined its paper and packaging business and sold LexisNexis for $ 1,5 billion to Reed Elsevier.


The acquisition of LexisNexis happened right at the turning point from online to the internet. Lexis was the main reason for Elsevier. Since 1970, the company had acquired the Congressional Information Services (CIS) as legal-political information service. In 1983, the CIS model was copied for the European market under the name of Europe Data. However, the company failed and in 1987 it was closed. But when LexisNexis in 1994 came on the market, it was an opportunity for Reed Elsevier as general publishing company with a consumer division, a business division and a scientific division buy the online information service. In addition to the newspaper archives as well as business and legal information, LexisNexis yielded many technical and marketing experience. This was used to establish online scientific information services such as ScienceDirect (1997) and citations index Scopus. Now LexisNexis has successfully converted to the internet world and has penetrated in companies, law firms, institutes, colleges and universities. 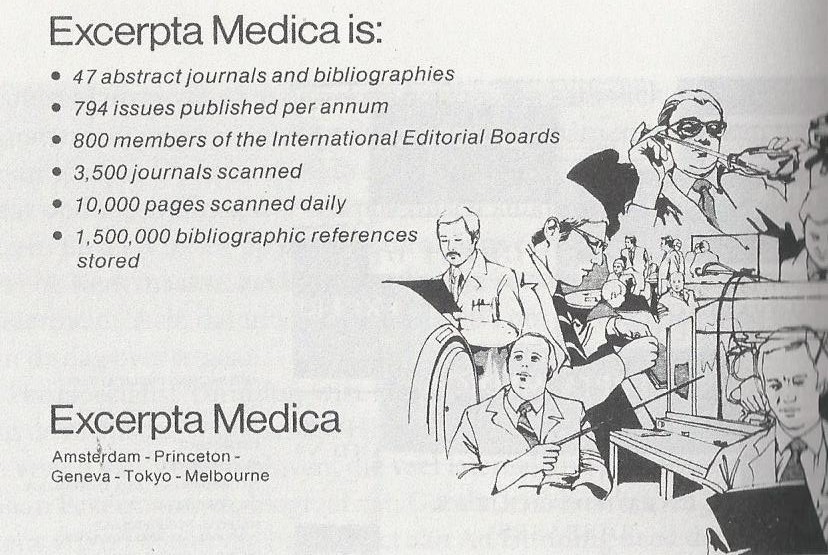 Excerpta Medica
Twenty years before the acquisition of LexisNexis by Reed Elsevier, in 1974, the first electronic publishing within Elsevier product was launched by scientific publisher Excerpta Medica (EM). This company was founded after the Second World War. The war had changed the scientific world. Before the war, the language used for scientific publications was German with publishers like Springer Verlag and Thieme Verlag. After the war this changed and English became the language of science. That meant new opportunities and new players in the scientific publishing world. EM was founded as an international publishing house in 1946 by Janos Freud and E. Landsberger, both German immigrants, in collaboration with Prof. M. Woerdman. The mission of the publishing house was to publish abstracts of biomedical articles. The medical discipline was divided into 15 sectors and from 1947, the first abstract magazine were distributed.

In 1957, Pierre Vinken arrived as an assistant abstractor/editor. Vinken studied medicine at Leiden University and was trained to be a neurosurgeon. Within Excerpta Media he eventually managed Section VIII, psychology and neurology. But besides work for this section, he also proved to be an excellent organizer and innovator. In 1964 he was appointed as chairman of the editorial committee and in 1966 as co-director of the publishing house. By that time the publishing company had a permanent staff of 54 medical specialists who took editorial responsibility for 35 abstract journals and reference works. The editorial staff produced the summaries of biomedical articles and allocated the index terms. In the mid-sixties the archive contained more than 1.3 million English-language abstracts and an even larger number of index terms.

After his appointment as chairman of the editorial committee Vinken quickly developed plans for the publishing portfolio. He wanted enlarge the number of abstract magazines. In practice, this meant reusing a summary and index terms in several magazines. In order to avoid retyping the abstracts, to prevent typo’s and misspelled index terms and to save time and hiring extra hands, he thought about an automated production street.


During his tenure in the academic hospital in Leiden, he had come into contact with the Hospital Information System (HIS), under development by  prof. dr. A. R. Baker. Inspired by this computer project, Vinken ordered in 1997 a report with technical specifications, which the Excerpta Medica system had to meet. In his quest to realize such a system, Vinken met Frans van der Walle, an aeronautical engineer. He advised him the purchase of a computer, four linked NCR 315 machines. These machines and the data entry activities were integrated in a new software house, Infonet, a joint company of the publisher and Van der Walle. In 1968 a successful trial run was held and after the installation of the system in 1969, the production process was completely realised with the portfolio enlargement and all significant savings.

By 1974 Excerpta Medica - in 1972 acquired by Elsevier - began to distribute electronically its publications both to pharmaceutical companies for internal use of the research departments as well as to electronic online services such as Dialog Information Service and ESA/IRS. With the launch of the online version, EMbase, the company had become a pioneer of the online industry in the Netherlands and had become a money maker for Elsevier in time.
Illustration from a brochure of Excerpta Medica is printed in the book Tegen idealisme, een biografie van Pierre Vinken, written by Paul Flentrop; Dutch publisher Prometheus (2007)