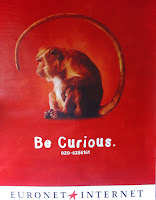 Go back in time to almost pre-internet times. You wake up in the morning of May 1st, 1995 and expect Labour Day rallies with red flags. But instead you are confronted with a poster of a monkey with a twisted tail and a slogan Be curious with a telephone number.  What would happen if you had called the telephone number? Would they have made you out for a monkey?

The poster
Such an alienating poster the Amsterdam people did not expect and certainly not on May 1, 1995, Labour Day. The poster was even cryptic in its design.  It consists of three sections: the monkey and monkey tail, the pay-off Be curious with a telephone number and a corporate name.

A monkey with an unnaturally twisted tail was not part of Dutch iconography until that time. What did the monkey tail represent? Of course, the word was known from the animal's anatomy. But was the monkey tail a secret code intended for insiders? People working with a calculation machine or a cash register might have recognized the monkey tail in the addition symbol point (@) of the calculator. Only the early internet adopters would have recognized the symbol by which the computer engineer Ray Tomlinson sent an e-mail from one computer to another in 1971. The e-mail sign represents the term at, because it indicates which internet domain the e-mailer is in.

The pay-off was intriguing in more than one sense. Be curious was an invitation to inquire, but in what. The telephone number did only tell that the answer would come from an Amsterdam subscriber. 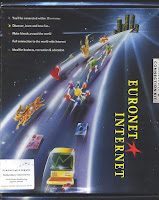 In addition to the symbolism of the monkey tail, the intriguing pay-off as well as the red star between the corporate name of Euronet and the Internet striking. Did the red star refer to the Cold War farewell in 1989 or was it a variation on the red star of the beer brewer's guild, as Heineken used on the label of its bottles? Asked for the origin of the red star, one of the founders of Euronet*Internet states: "There is no very complicated philosophy behind the star ... except that we thought The Sky was the limit. It had absolutely nothing to do with Heineken."

First Dutch internet poster
The poster with the monkey tail was the first commercial internet poster in the Netherlands. In 1995 internet did not have many internet users yet. The term was used for the first time on a May 1, 1993 in a national newspaper. But in 1995, the term 'internet' was not yet part of the common language of the general public. In trade publications it was used abundantly. But in 1995, the word 'internet' only appeared 22 times in the national newspaper Trouw, while in all national newspapers and public magazines, it was used two thousand times. From May 1, 1993 the first commercial consumer internet service was offered to the general public by XS4ALL. In January 1994, the Amsterdam Digital City (DDS) was opened and attracted ten thousand users in six weeks. By mid-1995 there were about three hundred thousand users of commercial and non-profit internet services. In short, only a small circle of internet users knew that the poster meant to promote a new Internet Service Provider (ISP). Only inquisitive people were lured by a cryptic poster.

The poster was the first public performance of the company, founded in the summer of 1994 by Simon Cavendish (1961-2005) and Arko van Brakel (1968 -). The ISP did not position itself as a technical company that granted access to the electronic highway, but brought the Internet, as the first ISP in the Netherlands with a marketing plan. The poster, designedby Krijn van Noordwijk, was part of that campaign. The internet novice received a welcome pack with internet software and a manual. Euronet*Internet thus set a standard for internet marketing, which was followed by the later PTT Telecom Service Planet Internet and World Online. Euronet*The Internet was purchased by France Telecom in 1998 and continued under the name of Wanadoo. Now Euronet is still used as a trade name at Online.nl, an internet service company that is part of M7 Group S.A.

After publication about the first Dutch internet poster in a Dutch blog, the item has become a subject of web archaeology. A Dutch museum, collecting Dutch digital heritage, has expressed interest to let it be part of its collection.
Gepost door Jak Boumans op 3:51 PM