Towards a Digital Culture in local and regional newspapers in Finland

The publishing sector has been struggling to reach a digital culture over the years. Especially the newspapers are in a transfer situation going from paper to a hybrid situation to digital first. Especially for local and regional newspapers this has been a battle.

Marja Heinonen, a Finnish consultant, has written a report on the route towards a digital culture in the Finnish regional newspaper Karjalainen from 2019 to 2021.

Regional and local media in Finland are fighting for survival alongside the rest of the media landscape. Two big questions for the media industry in 2022, both in Finland and globally, are a viable business model and a sensible way to organise in a digital environment. The latter is an essential part of the realisation of the former. Circulation of printed newspapers has declined almost without exception over the last 15 years. Vitality and growth will have to come from elsewhere. The key path chosen is the shift from print to digital media. Karjalainen is at the forefront of regional and local media in Finland, making a systematic and comprehensive shift towards digital media.

Karjalainen is a medium-sized regional newspaper that is number one in its region and has a strong brand in people's minds. In January 2021, the total number of staﬀ  was 47. This figure included contributing editors, photographers and archives. There were 33 writing journalists. 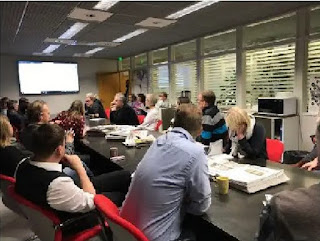 In 2018, Karjalainen decided to shift its focus to digital, i.e. to start making media strongly online. In 2018 it created its first digital strategy and systematically started changing its operations and organisational culture. This change was seen in Karjalainen as an ambitious and wide-ranging shift in approach and culture, not just small tweaks. The transition reached full speed in 2019. Deep change will only happen if the culture of the organisation is supportive of digital transformation.

One major step - and the core focus of this report - was taken in September 2020. Karjalainen’s top management started planning an organisational change in the newsroom - to build an organisation that supports better new digital doing. To push forward “digital first” thinking.

A new organisation was implemented in January 2021. The old structure was demolished. New teams and roles were created, print and digital were separated, and all positions were open for everyone to apply. The change process was based on inclusiveness, open interaction, a culture of experimentation, and responsibility-sharing.

In addition to the planned measures, in 2020, Karjalainen's digitalisation process was also influenced by the Covid-19 pandemic, an external factor that shook the world globally.

This paper describes newspaper Karjalainen’s transition process in organisational reform, which took place 2021 and assesses how the reform was received in the newsroom. It also looks at how Karjalainen succeeded in its strategic project towards digitalisation the newsroom in 2019-2021.

The documentation benefits the entire local and regional press scene in Finland and abroad, as the experience gained from the Karjalainen case both inspires and helps to design practical solutions for the press' own digital implementations. This study has been funded by Media Industry Research Foundation of Finland (Media-alan tutkimussäätiö).