At last a multi-functional tablet from Nokia

Nokia launched the Nokia 770 tablet last Wednesday. At last it has come out with a tablet. For more than 5 years the tablet got stuck in the US laboratory. The Fins had already a tablet in 2000.

In 1999 I was in Finland at the first Scholars’ Network Conference in Tampere, hosted by the Hypermedialaboratory of Tampere University in Tampere, the home of my friends Jarmo, Cai and Sohvi. As I had been studying the second wave of electronic books with Rockets Books, I presented an overview to the audience of the history and the near future. 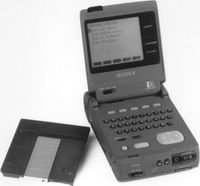 The history, I divided in two waves. Sony hijacked the term Electronic Book in 1990 and introduced a adapted discman plus a minidisk. The first device weighted 450 grams, had a black and white screen, but it rendered text, drawings and photographs as well as music. E-Books were produced for it and in fact the American novel Sliver was first published on e-Book and later in print. The device was introduced in The Netherlands in 1993 and a consortium of publishers and producers bundled reference works like a dictionary and hotel guide. The e-book adventure of Sony did not catch on. In my opinion for the singular function of reading books (no games, no diary), the electronic cover was too expensive. 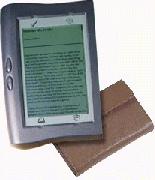 The second wave came in 1997 when internet was there as a distribution mechanism for e-books to be downloaded on a small tablet. Again, it was experienced as an exciting proposition for storing a number of book. But in my opinion it failed again by the louzy design, black/white screen and the single functionality.
So in 1999 I projected that smart phones and smart tablets would meet e-book functionality. There were not too many smart phones around at that time, while tablet were just around the corner.

After the presentation a manager of the Nokia Venture Company came up to me and invited me to Helsinki to speak to the people of Nokia Research and Business Development. They wanted to discover the world of e-books, the production and the copyright issues.

By April 2000 we had set a date and I travelled to Helsinki. I was told that I was going to be picked up by cab and that I would travel with a Nokia researcher in the States. So at 8.30h we were ready and waiting for the cab. In the meantime we had gotten into a discussion on e-book, smartphones and tablets. So in the cab he opened his attaché case and took a demonstration tablet out. It was clear to me that this tablet was for games and e-books. Later on it appeared that the tablet should not have been shown to me. But I had had a peep into the future of Nokia; little did I know that the tablet would be on the market some 4 or 5 years later.

The games edition of the tablet has now been presented as Nokia 7700. The new Nokia 770 can be used as tablet for pdf e-books. The Nokia 770 Internet Tablet is easy to describe. It's a pocket computer with a huge (800 by 480 pixels) touch-sensitive LCD, Wi-Fi and Bluetooth, and Linux. The 770 has no hard drive. The 770 displays PDF and Flash files directly. It looks smart, but for the time being there is a problem: there is no telephone yet. By the beginning of next year, the telephone should be in it. By autumn the tablet without telephone will be available for 350 euro. I will be the first one in line, if I have money.
Gepost door Jak Boumans op 10:37 AM