Hearst, The American publisher of books, magazines and books, plans to launch its own eReader this year, Fortune reports, citing industry sources. The company will start competing with Amazon and Sony, who are on the market respectively with the Kindle 2 and the Sony eReader PRS 700. 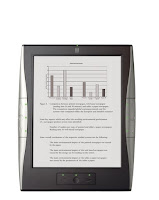 The difference however is that Hearst will choose for a larger screen than the Kindle 2 and the Sony eReader. It will choose a screen of about the size of a sheet of paper. The screen will be black and white initially, but later versions will also have a colour screen. Presently only the iRex Technologies has a large screen of 10.2 inch as well as Plastic Logic with a screen of 8. x 11 inch. Both screen are still showing black and white. According to Hearst the large screen better approximate the reading experience of print priodicals.

Hearst is the first publisher to take its own future with ereaders in its own hands. So far the book distributor Amazon and the consumer electronic manufacturer Sony have served the market; Amazon has been very succesful so far, while Sony has not been unsuccesful, when competition was lacking. But the succes has a kind of DRM-like problem. Amazon has so far sold eBooks in the Mobipocket format, a format of one of Amazon's subsidiaries, thus forcing publishers, using Amazon's download service, to follow the Amazon format and paying a hefty commission. It has scared off a number of publishers to be part of the Amazon portfolio. Last year, Sony was forced to open up its longstandiong proprietary format policy. Hearst has not said anything yet about formats.

But the announcement is more remarkable as Hearst is also presenting a business plan. The publisher hopes that the large screen will attract advertisers. Besides the sale of the device and the content Hearst hopes to pick up income from selling devices to other publishers and a share of revenue from selling content for these eReaders. Hearst will also license the underlying technology of the e-book reader to other publishers.

Hearst has been flirting with digital paper before. September 2008 the publisher presented its monthly edition with a digital cover. Only 100.000 copies were distributed at th kiosk and the cover could be watched for three months, until the battery died. Esquire picked digital paper as its owner Hearst has been an investor in the e-Ink company, the developer of digital paper. While the Esquire cover looked like an investor’s perk to Hearst, now it looks like it will be serious.