The European elections are over and the results known. Of the 375 million voters only 36 percent showed up. Traditional parties as Christians, socialists and liberals all went down by a lack to have a real program or a real campaigning candidate. Many an extremist party got a seat. One thing is clear: Barosso will remain as chairperson of the European Commission as his Christian party is still the largest one in the European Parliament. That will be another four years of weak government. 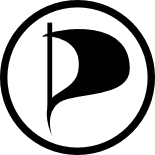 Interesting is the entrance of a representative of the Swedish Pirate Party in the European Parliament. The party, which was founded in 2006 by Rudy Falkvinge, won 7.4 percent of the votes and picked up one seat of the 18 available to the Swedes. The party will send Stockholm-born deputy chairman and computer developer Christian Engström, 49 to Brussels to take his seat as an MEP in the autumn. Mr Engstrom does thank his seat also partly to the high-profile copyright case against the Pirate Bay file-sharing site last April. The Bay has asked for a re-trial because of alleged bias from the trial judge.

The party has in its mision three goals: to “fundamentally reform copyright law, get rid of the patent system, and ensure that citizens’ rights to privacy are respected”. In practice this means all non-commercial copying of files and software to be legal, P2P file-sharing to be stimulated and the life of artistic copyright to be no more than five years, a far cry from the EU parliament’s proposed extension from 50 to 70 years. With its demands the party is quite extreme from other parties and governments in Europe. In France a three-strikes policy is to be introduced. In the UK such a policy is not unlikely, but technical measures such as broadband throtting remains also possible.

The Pirate Party is not just a one day fly. It has come up fast in three years and has affiliates in 22 countries (Argentina, Australia, Austria, Brazil, Canada, Denmark, Finland, germany, Ireland, Italy, Netherlands, New Zealand, Norway, Peru, Poland, Romania, Serbia, South Africa, Spain, Switzerland, United Kingdom and United States). In this election the European affiliates did not help much as the elections are organised according to country and not for the European Union as a whole. But in future the the party might grow in other European countries. The victory of one seta in the EU Parliament will undoubted ly be a sign for the national Swedish elections. Last time the party stumbled over a threshold of 4 percent. In the EU electrions they easily went over it with 7.4 percent. In the national elections next year the party should be able to grab more than one seat.