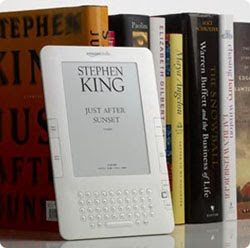 Beginning of October a press statement was released by Amazon about the international launch of a global Kindle. The global Kindle would be a Kindle 2, it would be 20 US dollar cheaper than the price of the US Kindle at that time and AT&T would be the telecom carrier worldwide instead of Sprint Verizon. The e-books will be only in English/American and will be two US dollars more expensive; the two US dollar paying for the telecom charges. Next year a Kindle DX would be on offer. After that statement it stayed quiet in The Netherlands even on October 19, 2009, the day of the launch.

In the meantime Sony is very active in The Netherlands and even thinks to sell more than 10.000 e-readers before the end of the year. Sony has associated itself with the popular internet bookshop Bol.com in the starting market in The Netherlands. So fat the buyers of e-readers buy 4 books to each e-reader; in the US each e-reader contains 8 e-books. The market condition in The Netherlands is now ripe for the sales of e-readers. The publishers are finally embracing the e-book; it is even expected that every new title will have an electronic counterpart next year. The price of the hardware has come down to an acceptable level. There is a portfolio of 110.000 e-books, including Dutch language titles. And the popular internet bookshop has become the prime promoter of the e-reader. Also the physical bookshops have started to sell e-readers of various brands and e-books. The bookshop chain Selexyz started last year selling the iLiad of the Dutch manufacturer iRex Technologies. It looks like the iLiad had a preferential treatment for a period, but now Selexyz as well as other bookshops sells other less expensive brands like Sony, Cybook, Cool-ER and Bebook.

Will Kindle make it in The Netherlands? No. The portfolio contains only English/American titles and no Dutch language ones. AT&T is only a business telecom provider. Amazon.com uses the Mobipocket format, while in The Netherlands the publishers have chosen for the EPUB format (the Dutch even can lend an e-book to four friends or devices).

Will The Netherlands embrace e-readers in one or two years. No, not even in before 2015. I believe that by 2030 the e-reader might be a common device or perhaps it might even be overtaken by a new tablet like a multifunctional, colour screen device for cultural matters like music, movies, books, cartoons, newspapers as well as social media. Something like the iPhone but with a larger screen.