BPN 1579: Digital storytelling, a dissection in the Observer

It is not my habit to copy articles from newspapers or magazines. But when I spot an article that will be obligatory reading for every digital media student in the coming years, I can't resist. So the UK Sunday newspaper Observer has started a series of articles to untangle the web and headed of the series with digital storytelling. The first installment is a worthwhile article.
Storytelling: digital technology allows us to tell tales in innovative new ways
As the tools available to publishers grow more sophisticated, it's up to us to experiment and see what sticks 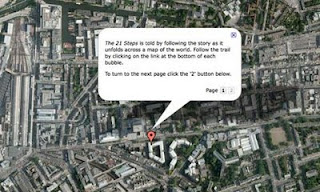 A web page from Penguin's We Tell Stories project, which used maps, blogs and other tools to develop plots.