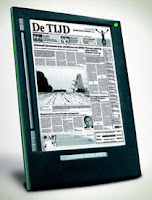 A third wave started in 2001, when E-Ink, a development company near Boston (Mass), started to develop a new display technology, which would offer a still screen and a long battery life only page turns would consume energy. By 2006 the first E-Ink based e-readers started to leave the factory. A Philips spin-off Irex Technologies in The Netherlands started to sell the Iliad at a heavy price of more than 600 euro. The new display was a real success and seen as the future for e-books, energy consumption long lasting, portability high. The only real disadvantages were the black/white screen and no movie facility.  A breakthrough came when Amazon released the Kindle on November 19, 2007. The devices caught on and the market effect started to come: more e-books were published and the prices for e-readers got lower to the level of consumer devices. By 2010 there were e-readers on the market on just under 200 euro. This also stimulated the production and sales of e-books and forced many a publisher at least to try it out. Also the standardisation of the format contributed to this. While Amazon kept to the Moby Pocket format, developed by one of their own subsidiaries, in the UK and some Western Europe countries EPUB was introduced as a format by publisher’s associations with even liberal copying facilities. 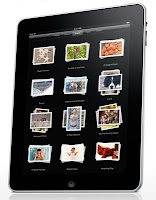 The fourth wave is now under way. The tablet vs. e-reader race has started. The tablet has come out of the laboratory at last. Since the launch of the Newton messagePad 100 in 1993, the tablet had gone back to the laboratory. The display, display writing and telecom technology were not mature enough. By the end of the nineties, HP launched it tablet computer, but it was still more a PC than a tablet. But the pace had been set. By 2000 Nokia had developed a tablet, which was intended as a personal entertainment centre; but it only left the laboratory since 2007. The tablet world started seriously with the launch of Apple’s iPad on March 12, 2010. It was followed by a slew of tablets. The iPad and other tablets had also apps for reading e-books. The screen was still tft with interference, but better; battery life was lower than E-Ink e-readers. So now the question came up do I buy both devices or just a tablet. It also meant that the E-Ink e-reader had disadvantages over against the tablets: limited multi-functionality, a black/white screen and no movie functionality. Advantages over the tablets for e-readers are: a better display technology without interference and a longer battery life. But at least, this race is delivering a wide market for e-books.

What will help the promotion of e-books more? Of course the best of both worlds: E-Ink like technology for display and energy, colour screens, movie facilities and better internet facilities. Research is going into that direction. Two indicators into that direction are Liquid Vista, again a Philips spin-off, and the tire manufacturer Bridgestone. Laboratory samples of colour displays have been shown on exhibitions. Liqua Vista has announced that it will be on the market with the screen product in 2012.  As Liqua Vista is also a Philips spin-off, a similar quality product as the Iliad of the  Irex Technologies is looked for, but with a more acceptable price than the Iliad of the former Irex Technologies.
While the e-reader circus continues its technology perfection, the portfolio of e-books is increasing. Springer Verlag already recognises a contribution of e-books in its turn-over. But also publishers of novels are seriously busy with the market of e-books, using marketing tricks like offering a chapter for free or a free book in a time window. E-book in fact has intruded into almost all genres of the book trade, less coffee table and art books. For many publishers e-book has become a standard routine to launch the electronic edition with the print edition.
It has taken more than 30 years for e-books to flourish. But with user friendly devices and a well filled portfolio of e-books, Mr Hart had many reasons to look back and celebrate this July 4th, 2011.