July 4th is a traditional American holiday, Independence Day. Unique for that day is the 40th anniversary of the e-book. It took e-book from 1971 up to now to become an accepted medium. One can say that the introduction of the Kindle e-reader on November 19, 2007 gave e-book an official status. That is 37 years after its start. What took the e-book four waves to surface? Is it basically culture and/or technology?
To start with book culture. Books have had a long tradition of culture carriers. The education and culture of a family could be measured by the amount of books and in the 18th century even by the meter. Books have been scarce until the French revolution. The Paris based university Sorbonne had only a room full of books when the French Revolution started. Now the library is measured in kilometres. Besides printed books have become common goods. Anyone can buy them, if they want. For many people reading books has become a daily habit. Take the underground in London and you always find people not reading a newspaper, but a book. Often those people have become fanatic about reading and could be dubbed the ink tifosi. They have not lived a day without reading a print book! But a new generation of digital natives is coming on, which has known gadgets from pregnancy.
But the habit is changing. Just look for people waiting to catch a plane or people at the beach. E-readers and e-books are becoming accepted. This after all these years….
It all started with Michael Hart. He was working with a mainframe computer, one that occupied a whole room. Having spent a long time on jobs, he was given some computer time for his personal interest. The story goes that he accepted the gift of computer hours, went back to his office and came out, saying that he would like to start a series of digital books. So he started typing his first publication in capitals, which was not uncommon at that time as Teletype (TTY) was quite common in the transmission industry. Also the inventor of the @ symbol in e-mail, Roy Tomlinson, wrote his first message in capitals and again the Gettysburg Address.
For a long time Michael Hart added e-books, being non-copyrighted books in the public domain. By 1990 his project had grown and people had offered him help in retyping books. The Gutenberg project gave some body to the organisation. From that point onwards the volume of non-copyrighted  e-books in the public domain started to expand at great pace.
Reading e-books had taken a different turn from reading them from a terminal, linked to a mainframe or a minicomputer since 1977, when PC’s got introduced. After 1980 e-books could be stored in internal memory on floppy discs, usually more than one. But from 1985 CD-ROM with 600Mb storage capacity became the e-book carrier of plain text or of interactive books produced by the Voyager Interactive company.
But for publishers it was clear that they liked to have a customised e-reader for e-books. So when Akita Morito, the CEO of Sony, in 1986 proclaimed the minidisk, being able to store 200Mb, the carrier of e-books, publishers sat back and waited eagerly. It would take another five years before Sony had worked out an e-reader based on the technology of the Data Discman. It was launched in Japan in 1991, in the USA and UK in 1992 and in 1993 in the rest of Europe. The smart move of Sony was to start co-operation with committees of publishers and software developers. So every country had its Electronic Book Committee to get familiar with the product and set up a publishing program. 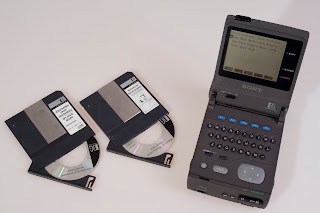 © Jak Boumans, 2011
But the device did not catch the fancy of book readers. Despite marketing moves like the introduction of the book Sliver, a book by Ira Levine, first as an electronic book followed by the print edition, e-books did not catch on. Actually e-readers did not catch on, as the devices were too heavy (450 grams) to carry around, the tft screen black/white and  too small, while battery life was too short and the price a hefty one of more than 1200 Dutch guilders (roughly 550 euro). By the end of 1985 356 e-books, Had originated from the USA and Western Europe, as listed in the TFPL Directory of CD-ROM. 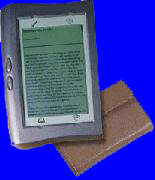 In the meantime internet was coming up and attempts for producing tablets were in motion. Roger Fiddler of the US newspaper publisher was carrying a prototype around the world, showing the future of newspapers on a tablet. But the main change in thinking came from internet. This network should be the distribution channel for e-books. Besides delivering the files, at least in the future, it should also become a virtual cash point. And a variety of tablets, with amongst others Rocket e-Book, came on the market, while print publishers were hesitant, fearing piracy and the same fate as publishers of music. However there was more success in this second wave of e-readers than with the Sony devices. The e-readers became more portable, but they still had a tft screen and a short battery life. Their price started to get lower, very slowly.
(continues)