The opening of the WSIS conference at the UNESCO Headquarters in was well attended. More than 1000 delegates were present at the opening statements and the keynote address, along with the translations teams. The first review session of the World Summit on the Information Society (WSIS) was on its way. The review is looking at the projects, which have been started up since the start of WSIS since 2003. One of the projects is the World Summit Award, which also celebrates its 10th anniversary. 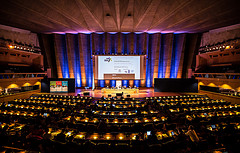 It is a slow start-up with all kind of technical discomforts: no infra-red pointer and powerpoint page turner for the presenter and the connection with the key-note presenter was riddled with the howling of a Mexican dog (no offence to the Mexican delegation).


So many subjects passed during the conference such as knowledge society, environment, education, freedom of speech and health. These subjects are part of what is called the information society and they all pass the review in the conference. However the funny thing is that the term information society is not yet in discussion. Perhaps the term was not a bad one in 2003, but now it sounds so Gutenberg.

Information has in the meantime a connotation of analogue content being thrown at a target group. Editorial staffs of newspapers threw and still throw a lot of information at their readers every day, but reserved only space for two or three letters from the readers. This has now dramatically changed over the years by internet. Editorial staffs, but also citizens now publish news from a far and nearby through Twitter, Facebook, LinkedIn and blogs. So you can not speak any more about information and information society. Another term should be thought up. Information has become a one-way street for information bits.

Now the society is using a two way street to exchange of digital content. So, what should be the term for this phenomenon now a days. There is a lot of talk of the Knowledge Society. But that is term is of 1962, followed by its later variation of Open Knowledge Society from 1969. Besides this term does not hint to anything digital. So what term? Digital Society is a  packaging term. Wired Society sounds technical. More terms can undoubtedly be thought up. But do they represent the two-way traffic in society? For the time being I prefer the term  Connected Society, one enhanced by technology.
Gepost door Jak Boumans op 1:11 PM