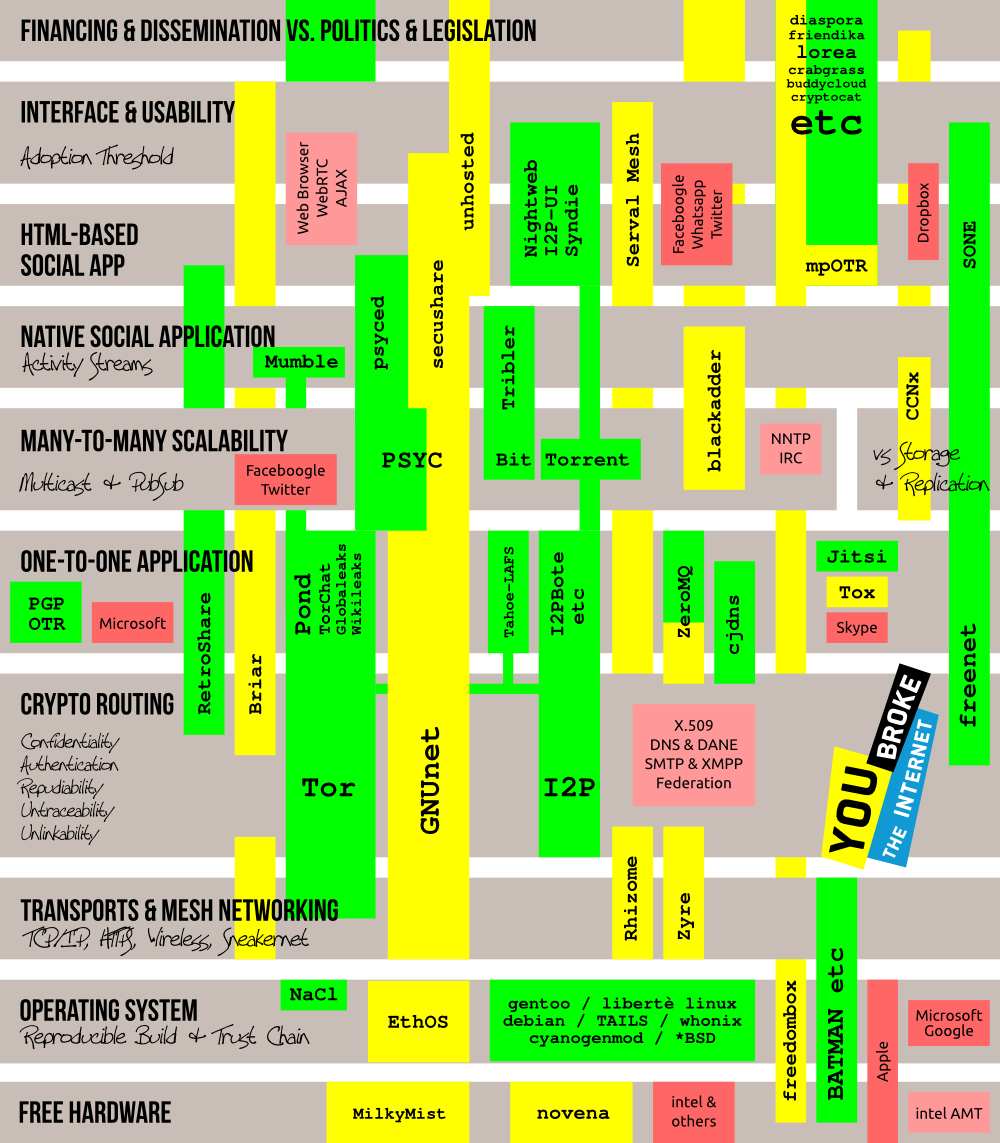 Amsterdam
Amsterdam announced two happenings in the framework of the launch of the Digital City. The Waag Society and the archaeological department of the Digital City announced two meetings addressing the question: How free and open is internet yet? On January 15 the international campaign "The Internet is broken . Let's fix the internet.",  was joined.  This meeting was dealing with subjects as  secure and reliable Internet technology, the development of secure protocols, hardware and software NSA proof , designing user-friendly cryptography, supporting data protection legislation and the development of alternative social media and search engines . On January 16 , the results of the meeting "The Internet is broken. Let's fix the internet" were presented in the meeting Silent rough roadmap”.


The Hague
At the Museum for Communication there was an evening meeting, organized around the new permanent exhibition Muscom needs internet. There were three presentations. 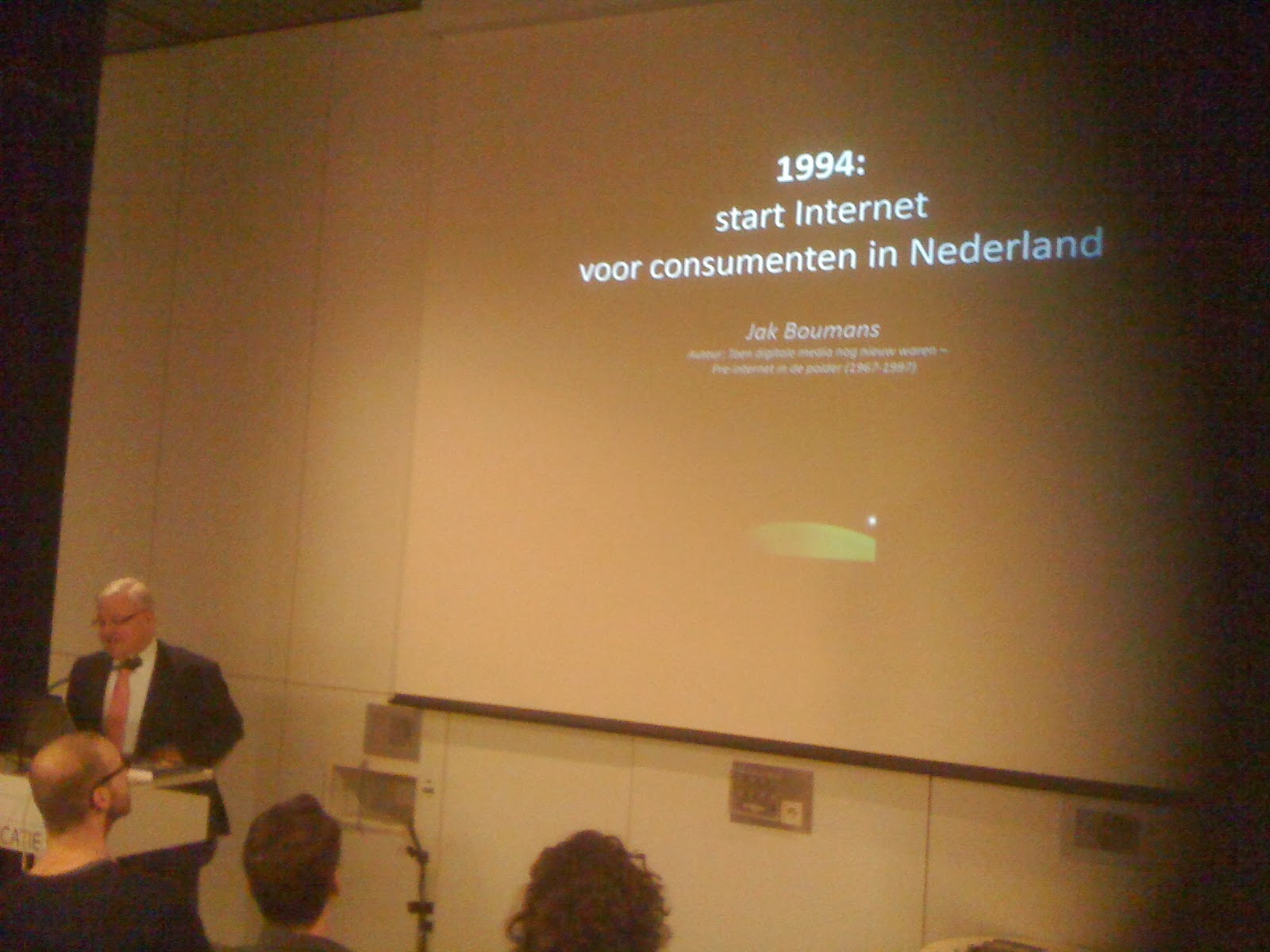 Consumer internet
The first presentation dealt with 1994, the year in which consumer Internet made a breakthrough of consumer Internet in the Netherlands. From 1980 Dutch consumers could retrieve information through the online service Viditel and use a rudimentary e - mail service. Until January 1, 1997, this videotext service and its successor Videotex Nederland attracted 325,000 users who irregularly used the service. When the Digital City opened its doors in the context of the municipal elections in Amsterdam in 1994, internet was not only available for users in Amsterdam, but also available for  users from around the country. On March 23, 1994,  De Groene, a weekly, reported, that already 12,000 users were registered. And on January 1 1997, there were  1 million registered users in the Netherlands, using the services of several ISPs (Digital City, Euronet*Internet, Planet Internet and World Online). In 17 years videotext services had totalled 325.000 users, while internet tripled its users to 1 million in three years thanks to the disruptive technology of the Internet.


I also had an epilogue in my pocket, but I forgot to read it out in public. “Marshall McLuhan argued in his book Understanding Media (1974 ): A new medium is never an addition to the old media nor let the old media alone. The new medium does not stop with the pushing of older media until the new forms and positions have been found in the media landscape.
Online has started to conquer strategic positions in the media from 1970 onwards. Since the sixties online pioneers such Lickleder and Doug Engelbart saw a new world for themselves with electronic messaging services, video telephony, electronic ordering and shopping, electronic banking, electronic publishing and translation electronically. Almost all technical issues had been rudimentarily developed in the pre-Internet age.
But thanks to the internet a flywheel effect came into effect. There was a wide user base, and there was a great advancement in refining technology such as e-mail, icu, Skype, e-shopping, e-banking, digital publishing and translation. Now internet has already intervened in the technology and economics, but there  is still some teething to be done. Internet will dig deeper into everyday life, social customs and influencing lifestyle. Life as well as  the Museum for Communication needs internet.

Internet abstinence
The second speaker was Bram van Montfoort. This youngster has lived without internet for a year and has written a book about internet abstinence. He told about the trials and tribulations he has experienced in that year : no Internet and no Facebook. He noticed that he was struggling to enroll into college for a bachelor degree journalism. His responses to requests by letter were not immediate as with e-mail. And after a year in the monastery of analogue media thousands of emails awaited him. His experiences he shares via an analogue medium, the book Een jaar offline (A year offline).


It became clear that the pace of his life changed and that hand written letters became an art form again. I recognize the custom of writing letters. During my time in boarding school, but also during my studies, I wrote many a letter to my parents and friends, in which I told him what I had been through and what future ideals I was striving after. Those subject you will not see addressed in emails and FB postings.


The project Bram van Montfoort lasted for a year. There have been similar projects of internet abstinence previously, but they usually were shorter and of course in a different era and context. Jeroen van Loon, the third speaker, has spent two months without internet during his studies. He got RSI from internet and decided to ignore internet. In 2011, a college in Utrecht started a research project on internet abstinence for a week with sixteen people. They reported by video about their experiences and their " withdrawal symptoms". And in 1996, a number of Internet fanatics in Rotterdam had themselves locked up for a period of time. Public reports on the internet abstinence were published. Of course there are big differences between Internet users in 1996 and 2012. In 2012, Internet penetrated much more in the daily lives of people.

Muscom needs internet
Life on the needs internet project by Jeroen van Loon I wrote as once a posting, a project awarded in the European Youth Award (EYA). Meanwhile, the internet artist has collected more than 300 handwritten letters. This website of this collection now has a new design and is more accessible. Now users can look for letters by categories such as gender, age and region as well as categories such as leisure, online/offline and pre-internet. The letters tell the stories about their first experiences with internet by people worldwide. They cheer the ease of making social contacts, but also question big brother, while children indicate that they may sit behind the computer for a limited time. The Museum for Communication in The Hague has now made ​​a selection from this letter collection and putt eight letters on permanent display under the title Muscom needs internet. For the museum, this is a worthy entry into the world of Internet.
Gepost door Jak Boumans op 3:18 PM