The new year has only just begun. Yet, for me 2014 is already a year to remember. It is 20 years since the Internet for consumers made ​​her entry in the Netherlands. On January 15, 1994 the ISP launched The Digital City ( DDS ) in Amsterdam.


The Digital City ( DDS ) started on Saturday January 15, 1994 with an television interview in the eight o'clock news. DDS was an internet project, intended as a discussion forum in the run up to the municipal elections of March 1994. The project was designed by netactivisten (Hack -Tic), the municipality and partly inspired by Marleen Stikker, the virtual mayor of the city. The town was based on community networks ( free nets) in the U.S. and Canada. The model of the city was chosen as a metaphor. 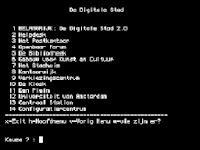 DDS was a great success. In six weeks, 10,000 people applied for access to the city. By visiting the virtual mayor of organizations, but also to institutions, the project received much local attention, as the mayor visited organisations and institutions. And it were not only people coming from Amsterdam, but also people from across the Netherlands. After the project DDS went on as an Internet service provider. DDS actually opened the doors for Internet consumers by January 1994 and by January 1, 1997 the Netherlands  had registered 1 million internet consumers.


The success of DDS was surprising. There used to be an online and multimedia industry in the Netherlands. Online databases such as Kluwer Legal Database were used for scientific, technical and business research. Electronic messaging services like Memocom were separate, mainly business services. For consumers, there was the information service Viditel, followed by Videotex Netherlands. And for amateurs, there were the Bulletin Board Systems ( BBS ). Furthermore, there was there a beginning of a multimedia industry with text CD-ROMs, multimedia CD- ROMs and CD -i titles as well as a few electronic books. But this industry was only 100 million guilders ( 45 million euros) great in revenues and the consumer share was very low.


Internet, however, developed separately from this industry, mainly through the academic network SURF. As of 1990 there were ISPs and by the end of 1993 there were approximately 295 companies connected to the Internet. In May 1993, XS4ALL opened an Internet service to consumers. Although in the first two days, 500 consumers were registered, the number of subscribers grew slowly. DDS, however, was the driver and was a resounding success.


In retrospect, a number of factors accounted for this consumer success.
a. The number of households with a PC in the Netherlands had increased from 7 percent in 1985 to 34 percent in 1994.
b. People wanted to do more with the PC than gaming, word processing, accounting and consult encyclopedias on CD - ROM.
c. Internet came as a disruptive technology. Existing online and multimedia technologies had to adapt or eventually disappeared, eg videotex and CD-i. Out of the concrete mixer containing different technologies, eventually only Internet and email survived. Teletext and CD - OM stayed on, but played no important part anymore. 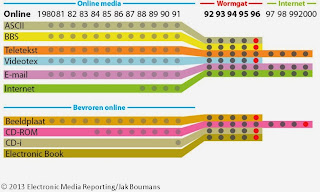 d. Consumer internet was cheap compared to online databases. Moreover, the Internet technology was user-friendly thanks to hypertext, had more graphic opportunity and had greater potency multimedia ( text, image, video and sound). Besides, Internet combined with email.


e. Internet did not developed within the existing online and multimedia industry, but within the bosom of universities and scientific institutions. Companies that had internet installed proved attractive to students after completion of their academic studies.

For those interested, Reinder Rustema wrote a doctoral thesis on the Digital City in 2001.
Gepost door Jak Boumans op 5:56 PM