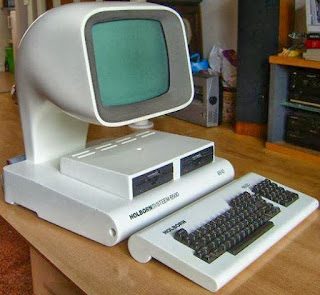 Catawiki organised an auction of vintage computer objects last week.  This new section at Catawiki of vintage computer objects differs from the other offered computer objects of common portable computers and tablets. The vintage objects on offer come from the eighties and nineties. They are so far old calculators, but also Apple machines like MacIntosh and Indigo as well as Commodore machines (with or without packaging). But at this auction it was possible to bid on a unique machine. And that was done by 10 bidders with a hefty price for the winner of the auction. It is not about millions as with the first Apple machines, but for a Dutch PC, 3,100 euros, excluding auction and shipping costs, is a considerable amount. This while the machine is no longer functioning due to a problem with the motherboard.operational.

But it is a Holborn (Born in Holland), made in a company that from 1979, exclusively manufactured PCs. The hardware of the machine was designed by Hans Polak together with Henny Bevers and the design of the futuristic terminal was made by Vos Industrial Designers. Inside, the terminal was a modified MicroBee monitor and used a Z80 processor. The Holborn used the operating system CP/M. 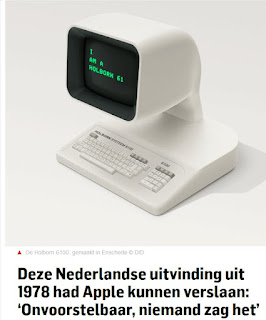 Article in the Tubantia of 21 May 2021, saying that this Dutch invention from 1978 could have beaten Apple: unbelievable, but no one saw it.

The company Holborn started with its headquarters in Holten in 1978. The first manufacturing facility was in Hengelo and later in Enschede. The company operated only briefly, from 1979 to 1983, when it went bankrupt. The company developed two production lines: the growth computer the multi 9100, an expandable, customised business system with a self-developed operating system Holborn Operating System (HOS); later the 7100 version was released, which could be expanded to the 9100. But Holborn is better known for the stand-alone Holborn 6110 under CP/M and the prototype 6500 both with the science-fiction-like monitor. There were probably only 100 devices of the 6110 produced and sold, mostly to small companies for administrative purposes. The styled and ergonomic machine was initially priced at 30,000 guilders (approx. 14,000 euros). In the Netherlands, the company had to compete against larger home-grown machines such as Elektrologica and Philips, but also against cheaper office machines such as Wang. And the real competition came in 1981 with the introduction of the PC by IBM and later clones.

The auction item is a Holborn 6110. The offered system consists of a keyboard monitor console and an external box with two floppy disk drives. The system was originally purchased in the early 1980s for about 20,000 guilders as a medium-sized business computer.

This computer stopped working in 1996. Recently, the computer has been turned on, the disk drives turn on and the fan on the computer turns on. The screen does not turn on and it seems, that it failed to repair a part on the motherboard. 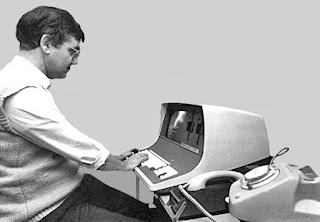 Personal note. I was introduced to PCs in 1980 at the new media laboratory VNU Database Publishing International (VNU DPI). in Amsterdam. There was an Apple IIe present, but the automation department of VNU had bought a large batch of Superbrains (talking about AI) and handed out these machines, which worked with the CP/M operating system. The Superbrain was ergonomically a clunky machine, where you could get problems with your right hand from the raised edge at the keyboard. Sitting behind the Superbrain in 1980. (Photo Coll. JB)