Gearing up for Bahrain

There was intensive e-mail traffic with Bahrain yesterday. Bahrain will be the host to the World Summit 2005 Grand Jury beginning of September. So now the hosts, the Bharain Government, and the local chapter of ISOC are clearing the administrative details for the arrival of the Grand Jury eminent experts and staff. I have been invited as a staff member.

It has been through the World Summit Award 2003 that I got to know Bahrain. In Dubai in 2003 I met and befriended Waheed AlBalushi, a Bahraini by birth. Since WSA 2003 Grand Jury we have met several times at various occasions, Hong Kong, Beirut and Vienna and had many e-mail exchanges. In the beginning of 2005 I was proud to be part of the jury of Bahrain e-Content Award.

Now we are gearing up for the Grand Jury of the World Summit Award 2005. With the WSA 2005 I expect more entries than the 803 entries of the WSA 2003. Theoretically the batch can be 1334 products (168 countries x 8 entries), but not every country will enter 8 products. So I guess the Grand Jury consisting of 40 eminent experts will evaluate almost 990 products. So in one week the jurors will see 990 products from all over the world. Who gets such an opportunity? 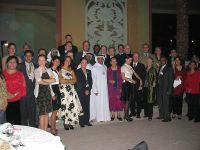 Of course just meeting 40 eminent experts from all over the world will be an interesting happening in itself. During the WSA 2003 Grand Jury in Dubai we had a real fine team. Besides working together, the jury members made many friendships. And they produced a book in 40 days (see below), which was presented at UN World Summit on the Information Society in Geneva. It was unbelievable that a band of 35 people who did not know each worked together and became professional colleagues and friends. I am anxious to see how this is going to work out this year with the WSA 2005 Grand Jury members.

Book jacket of e-Content: Voices from the Ground