Party at the Media Park

In order to keep Hilversum on the multimedia race, the municipality, the Chambers of Commerce and some companies are active with a kind of incubator under the name iMMovator. This institute has three tasks:
- accompany start-ups;
- transfer of knowledge;
- networking.
Some 8 start-ups are now operating there. And there are some innovative, some curious and interesting companies among them.
- House of Secrets, an animation studio.
- KingContent, a content provider with a cross media hit for young fathers- Vivesta, media flow developers.
- File-Reg International, online registration company for ideas.
- Dagjetelevisiemaken, an entertainment company offering parties a day program of producing a television show.
- Beeld, an audio-visual company.
- Stoneroos, an interactive TV company.
- Wunderworks, an interactive, wireless and multi-user screen company.

So far the organisation has had a failure. One company, an online recipe provider, has gone bust. When I was told by a municipality official about the start-up company, I told him it would not work, knowing the margins in the production of cook books, the occasional use of a cook book, the nice to know urgency of the information and the low advertisement will of food producers. I should have made a bet with him for a beautiful bottle of wine.

The party concerned the opening of a joint venture between the incubator iMMovator and two colleges, Hogeschool INHolland and Hogeschool van Utrecht. Together they set up a work place where students can work on assignments for companies. In their advertisement they profile the work place as the innovation link between education and media company. At the party the work place was baptised with the cryptic name MP4.5. The work place is located in the middle of the Media Park, a beautiful spot to maintain contacts with media companies. 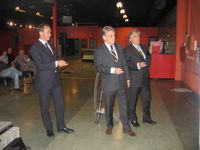 Mr Koopman of the Hilversum Townhall (middle) and the two board members of the colleges reveal the name MP4.5 on the Wunderwall (Photograph: iMMovator)

Two teams of students showed their projects. One team had produced a back-office for music download services with Microsoft Media Center. The other team had set up a location based service with Bluetooth. The projects were not spectacular, had bad usability (use of fonts and colours) and lacked thorough research on location based services in the Netherlands. But the students will undoubtedly learn the serious side of business.
Gepost door Jak Boumans op 10:39 AM