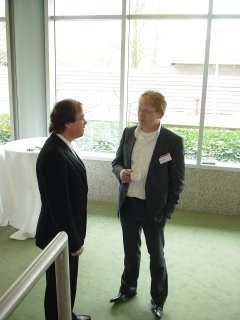 The NOS News is a large operation, running daily news broadcasts, news broadcasts for children, a teletex service, internet and SMS service. All these media used to be run by their own department. But over the last two years all these departments have been integrated and networked into one organisation. This means that news is treated integrally using a cascade of media. Laroes claimed to be the first integrated digital television and radio news operation in Europe. You can see NOS News now as a cross-media digital news channel with many sub channels.

Laroes told the audience that NOS News is seen as a kind of authority. It brings news to the older audience, especially with the 8 o’clock evening news. But he also recognises that the audience is becoming fragmented, ranging from seniors to youngsters, who do not look at TV broadcasts. So he realised himself that he has to serve these youngster in their own way. The 8 o'clock news for adults, the internet site NOS Headlines for the youngsters, the uploaders. It is a kind of working place for NOS News for new journalism and a trial place for letting young bloggers in, as long as they talk about something else than cats.

Laroes made an interesting remark, saying that material of the news should be available for bloggers. I asked him later how he saw this happen: creative commons and pricing. I told him the story that I requested from the Image and Sound Institute, the Dutch public audiovisual archive, three minutes of the NOS Journaal of the launch of the videotext service Viditel in 1980. I could get the three minutes and load them onto my weblog series of 25 years Online in the Netherlands, if the editor-in-chief of NOS News would give his permission and I would pay 600 euro for one year. Laroes admitted that the whole organisation, NOS News and Image and Sound Institute, was yet ready for this kind of cooperation between bloggers and NOS News, but he sees this as an ideal.