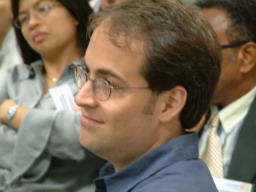 On Tuesday my American friend Andy Carvin has launched another blog. Andy is for me a pioneer in the blogosphere. I met him for the first time in 2003 in Dubai, when we were there for the Grand Jury of the World Summit Award (WSA). From there he was sending blogs, sending postings by mobile, photographs and podcasts. When we were together in Hong Kong in 2004, he was blogging from the conference floor. And at the World Summit on the Information Society in 2005 he had put together a bloglist with postings of many of his colleagues and friends. I must confess, I have been jealous of him, as he does it all with such an ease. And given the amount of days a year he is on the road, the postings must serve as a contact with the home base.

Andy has many interests, but subjects as e-learning and digital divide fits his bill. Last Tuesday he has launched the new blog. This blog will focus on the intersection of Internet culture and K-12 education. One of the primary goals is to help guide educators through the ins and outs of what's often referred to as "Web 2.0," including blogging, podcasting, vlogging, RSS, social software and community networks. He is planning to explore some of the creative ways students and teachers are using interactive technologies to improve learning, as well as dissect the controversies that often occur when classroom culture and online culture collide.

His opening is a cliff hanger at the same time. He basically says that if you live in Texas and are in the network of a school district, you might read his posting probably one time. This is due to all the filtering these school districts do. These days it is the M-word. This time it is not the prudence police falling over the word m*sturbation and neither is it the open source lobby banning the word Microsoft. No, this time it is the URL MySpace.com. To officials of some school districts in Texas MySpace is a perverse meeting place. So even for teachers articles with the M-word are purged. In order to get around this bloggers are writing the URL backwards, use all kind of signs to separate the letters and even make an illustration of the name and voila, it fools the filter.

His focus is going to be interesting as media literacy is becoming a subject teachers will have to be trained in during their college period or, when they are teaching, after school. Of course it does not help when resources are blocked. Media literacy is fast becoming a subject covering the use of new media in school and in class, developing critical, analytical and creative skills towards new media, educating children with a sense of safety regarding new media. I guess that this new blog of Andy is going to be a resource for media literacy.