Summit for the Future (4)

The Asian Media Boom is coming 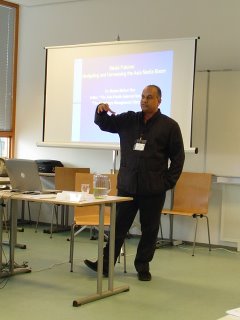 At the Summit of the Future I met Dr. Madan Mohan Rao. I knew his name from e-mails and books on telecommunications. He is the editor of The Asia-Pacific Internet Handbook and The Knowledge Management Chronicle. But when he came over to the exhibition booth of the World Summit Award, we knew in a minute that we had a common friend, Osama Manzar from New Dehli. We got to talk about him and of course about his name. I told Madan of our last meeting at the airport Malpensa in Milano before the World Summit in Tunis. Osama and his nice wife were lugging the books e-Content: Voices from the ground around, when I noticed them. So without giving it any thought, I shouted Osama. When I was finished it was silent all around me and people started to move away, which they would have never done if they had met Osama Manzar in person.

Madan held a speech on the Asian Media Boom. Presently the Europeans looked with some scare to Asia and in particular to India and China. Economically these countries are growing faster that the USA and Europe. In fact Madan mentioned that there are more millionaires in India than in the whole of Europe.

Madan spoke on Asia's Winning Card as a risk. In his program abstract he wrote: South Korea hopes to become the gaming capital of the world. Bangalore is becoming a leading software development hub. Goodness knows what exactly China is becoming, but already the mobile market in China is the world's largest. Has this happened because Asia countries are willing to take risks by nature? Or is their business culture fundamentally different from the rest? Yet while some countries are willing to take risks in the IT business, their media remain very closed and conservative - by some "Western" standards. What are some of the scenarios for the preferred futures for media and entertainment in Asia, home to 2/3rds of the world's population? We also know that groups that isolate themselves from the rest of society quickly radicalize. What do media need to do to keep them in the conversation?

It is clear that Asia is not a monolithic media continent, but we will be seeing countries like China and India, together they are larger than the USA and Europe, move up into a mature or advanced stage over the years.

BTW At the closing of the summit there was an exercise. Every delegate was asked to contribute a keyword characterizing the summit. These keywords were typed in and formed together a cloud of opinion, a tag cloud. It will be analysed on the words, the synnyms and antonyms and their associations. It was an interesting exercise, but I reserve my judgement and I am anxious to see the result.