The book differs from the last edition as this new edition contains more than 400 examples of best practices across the 8 categories in the countries of all six continents; e-government, e-culture, e-business, e-learning, e-entertainment, e-science, e-health and e-inclusion.

The book is a result of the strong networking of WSA through which there is access to e-content experts in 168 countries. It is an exercise of finding "what is happening in each of these countries in the area ofs of digital content development". The production was started right after the Bahrain Grand Jury on September 15th, 2005 and has ended with the presentation of the book on the even before the opening of WSIS in Tunis, on November 15th, 2005. It has been hard work for Osama and his wife Shaifali. The book has been printed and bound in India.

In his preface Peter A. Bruck writes: "Over the last 50 years, Information and Communication Technologies have become exponentially more powerful and radically cheaper and smaller. E-Content does not keep up with with technology in term of speed and developemnt, economies of scale and simplicity of consumption. This results in a dynamic structural gap. This gap widens as we move into the Information society.
The content gap is not just one of the technological versus human capacity. The nature of economic and social structures and general awarenesss are also important detreminants. There is an imbalance of pay and an inequity of investment. Post-industrial societies spend enormous sums of money on equipment, gadgets and "tech things'. They invest far less in quality stories, knowledge and insight."
I would like to add that post industrial societies consider e-content as a commodity, which can be traded and be bought, while in developing countries the production of quality e-content is a matter of available money and political will.

e-Content: Voices from the Ground: The Sequel 2.0, edited by Osama Manzar and Peter A. Bruck, has been published by the Digital Empowerment Foundation and the World Summit Award.

The book costs Euro 15 or USD 20 and can be ordered by e-mail: osamam@gmail.com or osama@manzar.info 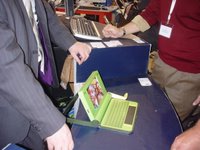 In part 3 I talked about Negroponte's 100 dollar PC. My friend Andy has put up a movie of 8 minutes about the chanllenges of the 100 dollar PC. The PC was presented on Thursday, but the PC is not commercially available. The distribution will be done by bulk consignments through ministries and government agencies. So it will not be a threat to Dell and other PC manufacturers. My friend Andy Carvin has produced an 8 minutes movie on the challenges of the 100 dollar PC.
Gepost door Jak Boumans op 11:50 AM