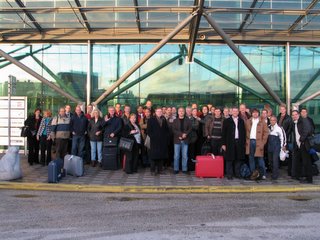 The party of 38 participants at Helsinki airport. In left of the red suitcase in blue jeans Pietrer Diphoorn of Syntens, the co-organiser, and left to him in black coat Hans Sleurink of the news service Media Update, co-organiser and my co-inspirator of the trip. (photograph published on the Syntens weblog)

Yesterday at 1 o’clock I sent off the Dutch group together with the Finnish co-organiser Mikko. 38 participants went back to the Netherlands. In the schedule there was enough time for the check-in at Helsinki airport. In the morning all the tickets of the participants were re-confirmed; a habit I have not done since the pre-pricefighting airline era. But I caught Hans, my partner in this event, just before he went to the plane; just to make sure that nothing had gone wrong.

So now we can start looking back. Did the trip bring what we had promised? Were the participants happy about the trip? Was the hotel okay. Was the social program okay. How bad did the splitting of the group thanks to KLM influence our score? Of course I look to more signs than only the feed back survey, which still has to be distributed. I have seen already the Syntens blog (in Dutch) and one of the participants has promised me his vlogs with video-interviews. According to the Syntens blog the trip has been a success. Also one of the participants, Hille Meetsma, stated that his mission was a success as he had picked up a lot of contacts and was asked to give a presentation about health software at the University of Tampere; it was an accidental contact he picked up during the big MindTrek Award party! But again this is opinion of two participants and there were 38 in all.

For other blogs on the trip to Finland see:
Syntens (Dutch)
Gerrit Visser (English)

I will not get too much time to look back to the Finnish week as I will go to Tunis on Monday. My mailbox has been flooded with mail of the UN World Summit on the Information Society (WSIS) and the World Summit Award (WSA). I saw that Andy Carvin, a first generation WSA juror, has composed a WSIS superblog with all writers about WSIS. I better start reading my mail in order not too miss essential mails like the access papers/visum to Tunis.