This week a press release was published on a commemorative DVD production of the Dutch painter Rembrandt van Rijn. Next year it is 400 years ago that Rembrandt was born in Leiden. The DVD is a co-production of several institutes, which study Rembrandt’s works such as the Rijksmuseum, The Rembrandt House, the Maurits House and various foreign musea. On the DVD the life, the artefacts and techniques of Dutch painters will be made accessible. 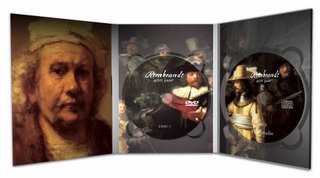 Rembrandt belongs to the greatest painters ever. The DVD shows why. The era of Rembrandt, the Golden Century, comes alive. On the DVD one has a look in the private life of Rembrandt, his parental home, his youth, his time at school, his masters, his studio, his turbulent love life and his years of glory in Amsterdam. More than 100 paintings, etchings and drawings are shown and explained. Special attention is paid to the Night Watch also dubbed The Company of Frans Banning Cocq Preparing to March. What is the secret of Rembrandt technique? A restoration expert shows the paintings with the help of an X-ray machine. The DVD is available in 9 languages.

The DVD is published in co-operation with CD-ROM Print studio. With this application 49 works of Rembrandt can be reproduced. Not only paintings, drawings and etches, but for example also the public notice of intended wedding with Saskia van Uylenburgh.

The Rembrandt year will be an international event. Many expositions are planned in various cities in Europe, America and Asia.

The DVD has been published by Capital Interactive Publishers in ’s-Hertogenbosch and will be available through bookshops and shops in musea.

In the press release the publisher hails the DVD as the first interactive production on Rembrandt van Rijn. It is indeed the first DVD on Rembrandt and the publisher is right in as far as the entire life and works of the painter. But he has obviously not done his home work as far as interactive productions on Rembrandt are concerned. In 2001 the CD-ROM Rembrandt the Printmaker, a co-production of Softmachine and the Rembrandt House, was entered in the Europrix competition and was awarded a nomination in the category Knowledge, Discovery and Culture.
Gepost door Jak Boumans op 9:50 AM