Yesterday afternoon there was a session on e-Business. We had a selection of six speakers, of which two World Summit best-practices: Tejari, an e-Business best practice of 2003 and Web telegram, an e-Business best practice of 2005. Tejari is an e-Business portal in the United Arab Emirates. It has been very successful and is doing well. Also the people of the Tunesian Poste were present with their application of Web Telegram. At first sight you would think that the application is rather simple: the mail offices exchange telegrams, the mailman brings it to your door and that sit. But in Tunesia, the telegram is often a confirmation of a money transaction and as such it is part of the banking system. By sending web telegrams the Tunesian Poste is now able to track the telegram from sending to reception by the receiver.

In the session we also had a kind of an ugly duck as far as the subject was concerned. It was a project concerned with user-generated content. You expect a story on the project, how they organise the production of the content. And that is what the audience got. Buntes Fernsehen (Colourful TV) enables the user and the community not only to watch, but also to be seen. As a member of a club or an institute like the fire brigade wanting to show the local community how interesting, exciting or funny club life can be, Buntes Fernsehen provides all the necessary tools to does so. In the first Buntes Fernsehen community Engerwitzdorf, a town in Upper Austria, TV from Engerwitzdorfers for Engerwitzdorfers was initiated. The passive user has become an active creative consumer. So users no longer consume only, they also contribute to the community.The story was begging the question as to business models. How are you generating revenues from user-generated content?

This morning I caught an early bus, which did go straight to the Kram. Again we had to go through all the ID- and security checks: matching the badge, sending your bag through the X-Ray machine and being frisked electronically. As I was early, I missed the long rows and the predictable collapse of the security system. The security is absolutely tight. Police in front of the hotel. Lines of military three kilometres around the venue. Police on horse back and the special forces. This all for the safety of 20 heads of states and of course for the participants. 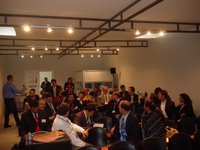 The award winners got up early for their day of celebration

This is the World Summit Award day. Two years of efforts come to an apotheosis in the Gala, celebrating creativity and ICT products. Producers are honoured and creativity celebrated with the award ceremony and performances tonight.
In the meantime there is more WSA news coming in. Abdullah from Bahrain shows the WSA catalogue of Arab WSA nominations. Gagarin from Armenia presents the national catalogue, completely in the style of the worldwide catalogue. So we see spin-offs coming about. 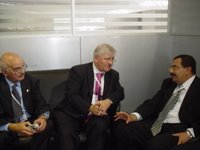 Minister Tarek Kamel (right) and the director of Cultnat (left)

But it does not stop there. As I recently was in Egypt for the national award and spoke with organisers about cooperation, we continued the talks about co-operation. This afternoon we concluded talks on a Memorandum of Understand. WSA will have a partner in ITIDA agency and RITSEC. Together we will work on the local competition and stimulation of content and knowledge dissemination. When minister Tarek Kamal of Communications and Information Technology walked in the draft was ready. Tomorrow the MoU will be signed in the presence of minister Tarek Kamal. Mission completed; next mission starts.

This blog comes to you with compliments of the Austrian pavillion
Gepost door Jak Boumans op 4:10 PM