The rise and fall of VNU

While I was in Tunis, a classic drama was enacted in the business world and in someone’s personal life: VNU abolished acquisition plans of IMS Health, while CEO Rob van den Bergh announced that he would step down. A few days later some venture capitalists announced that they would like to acquire VNU with a view of breaking it up. The IMS Health acquisition, which should have become a crown on the international expansion and a turn-around in the scope of the company, became a sword of division between the management and the share holders.

VNU was my first employer, when I started in 1970 in the reference department of its subsidiary Spectrum Publishing. At that time VNU (which is an acronym for United Dutch Publishing Companies) was just 5 years old and consisted of a conglomerate of magazine publishing and distribution companies, newspaper companies and book publishing companies. In 1975 the holding started a business press division by buying the controlled circulation weekly Intermediair. From 1979 till 1986 I worked in this group, which just started to look outside the Netherlands and Belgium. As the company realised that magazines and newspapers are dependent on the economy for advertising, a strategy of international expansion and change in scope was started.

International expansion
The UK was the first expansion outside the continent. VNU bought the computer publications of Hayden, a publishing company of the British politician Michael Heseltine. From 1981 till 1983 I was project manager there, flying back and forth from Amsterdam to London; from 1983 till 1986 I moved with the family to London. After London many acquisitions were done in Europe.
The international expansion in the US started with the establishment of the publishing company Arete, which published the Academic American Encyclopedia; it was not a real success and in 1983 sold to Grolier (thus becoming the first encyclopedia online). By 1983 VNU bought Disclosure, a company with information concerning companies, quoted on the stock exchange (I was in England at that time and had regularly to fly to VNU HQ in Haarlem to demonstrate the Disclosure database using the example of the US salary of KLM’s CEO Orlandini). And interestingly enough by 1983 VNU had picked up 50 percent of shares in IMS! VNU started to expand in marketing data.

Turn-around
When the marketing data business in the US showed its strong side of not being as dependent on the economy as magazines and newspapers, a turn-around move was set in from a traditional print publishing company to a marketing data company.
In order to realise this the company made the following corporate moves:
- buying and selling of the ITT World Directories Yellow Pages;
- (an emotional) sale of the magazines to the Finnish company Sanoma;
- sale of the newspapers to Wegener.
The profits of those sales were spent on acquisitions in the States like the acquisition of AC Nielsen and other companies. The acquisition of IMS Health should have become the crown on the turn-around.

The break-up of the company
After that VNU called off the acquisition of IMS Health, which looked more like a merger, Rob van den Bergh stepped down as CEO and over the weekend investment companies started to swerve as vultures around the corps. Apex and Cinven as well as the Carlyle Group and Candover formed consortia to take over VNU, break it up and sell it in pieces.

Next CEO
I met Rob van den Bergh in 1980 when he became a publishing director of Intermediair weekly in Amsterdam. He made his way into the hierarchy of VNU quickly. He became the youngest CEO of an international company in the Netherlands. As VNU collected more revenue in the States than of the rest of the world, Rob van den Bergh moved the corporate headquarters in the provincial Dutch town of Haarlem to its present HQ in New York (not Harlem, though). Also his family moved there also (not to Harlem, of course). Now that he has stepped down and the VNU’s fate is unsure, it is certain that he has been the last Dutch CEO of VNU. 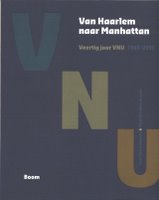 (It is this year 40 years ago that VNU was founded and based its corporate HQ in Haarlem. At the occasion a commemorative book, Van Haarlem naar Manhattan (From Haarlem to Manhattan: 40 years VNU 1965-2005), has been published in the Dutch language. In the epilogue the merger of VNU and IMS Health is already taken for granted. The authors even mention that there is speculation in the market about a new corporate name for VNU.)


The jacket of the commemoration book, published by Boom Publishers