I have left Tunis. After the check-in at the airport counter I had to pass through the special WSIS customs section, had to get my luggage x-rayed and had to pass the security gates to be frisked again. Ever since entering Tunis, I have been going through the rituals of security checks every day. This should give a sense of security. Also the obvious presence of military, police and tourism police should strengthen that sense of security. In three kilometres around the airport and around the Kram Expo, there was a policemen at every 250 meters and the closer you got to the Kram Expo, there were even policemen on horseback and special forces. Tunesia must be a country with more policemen than inhabitants. In front of every official hotel was a policemen with a stengun and in the hotel secret service people were just chatting as natural Tunesians, while in the meantime checking potential contacts with Tunesian dissidents. Transport from the Kram Expo to the hotels was tightly organised with special buses; taxis could only reach a parking place near the Kram Expo, but from there the delegates were bussed to the entry gates with the unavoidable automatic badge check, x-raying, passing the security gates and being frisked, if you happened to have a Belgian 1 euro cent piece on you. The Sheraton Hotel on a hill looked like a bastion. There were roadblocks, soldiers with stenguns and a lot of people apparently just hanging around. Altogether the atmosphere just gave a false sense of security while it was a perfect cover to keep tabs on the local and foreign crowd. 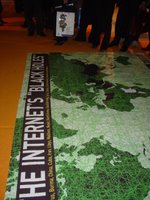 On last Wednesday there was just that incident on the exhibition floor that the organisers had tried to avoid. Like a mobimob, there was at once a crowd of people at a crossing near the Austrian pavilion, complete with TV camera teams and photographers. A few people unfolded a map of the world took the protective paper from the adhesive and taped the map on the exhibition floor. In a minute everything was done. And the map was in a strategic spot as it was on the crosspath to the central a hall of the exhibition floor were that night the World Summit Gala would take place.
The map contained the text: THE INTERNET'S BLACK HOLES. Of course, Tunesia was one of the black holes as Internet and traditional media are censored. 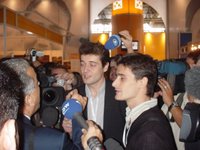 The mobimob was immediately joined by Tunesian secret service people who tried to get hold of the pasting people, while another older man started a debate with the (foreign) TV journalists, of course denying any censorship. This incident lasted for a quarter of an hour. Eventually people disappeared leaving the map pasted to the floor. The next morning the map was not there anymore; most likely the carpet had been replaced overnight.
Gepost door Jak Boumans op 3:36 PM