This is really mobile. I am at Tunis Cathage airport and I can wi-fi for free at a decent speed. I can upload the photographs of yesterday afternoon and last night. It turned out to be a very busy day.

In the afternoon the signing of a Memorandum of Understanding with Egypt was on the roll. My Egyptian counterpart Sheriff and myself had been working on this and the PR lady of the Egyptian government suggested that we would sign the MoU during the Egyptian reception. That turned out to be a fabulous suggestion which caught the attention of media and of the ministers present. 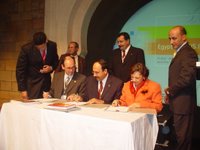 Minister Tarek Kamel witnessed the signing. In the talk with the signatories he has indicated that he happily supports the idea of setting up and academic content institute as long as it is on a 50 pct matching basis. This is going to be great. Straight after the signing, we talked with a big mobile player who wants to support the idea and put money in it. So this is going to be a project starting today. The Egyptian agency with Sheriff is going to be in charge on the Egyptian side.
But the signing had also an unexpected effect. The same afternoon WSA was asked to have another MoU by the Armenian government. They want to have an e-Content Summit next year. And at the Egyptian reception the Malaysian minister was present and recommendd to the Malaysian Development Corporation (MDC) to obtain an MoU, which will be signed in the presence of the minister this afternoon. Pity I have got to miss that. This MoU is a prestigious one as it is signed with the people of the superhighway project in Cyberyaja (love the name of that city). 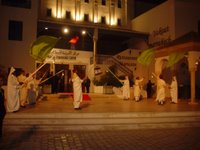 At night we went to Hammameth, a one and a half hours busride from Tunis, to attend an official dinner of the Tunesian busienss club. It was held in the newly built market place (medina) there. After a walk through the shopping street, we were welcomed by a reception commission with candles, dancing girls and a snake charmer. The dinner was laid out for some 500 people. Faouzi, our Tunesian juror had insisted on our presence. By two o' clock we were in the hotel again. I guess that WSA can look back at a very sucessful day after the Gala. 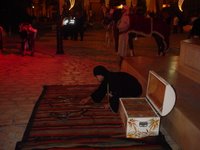