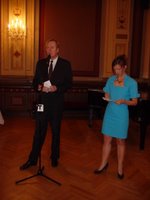 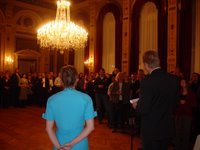 The city offcial and Maria (left); the audience in the restored hall with chandelier (right)

Last night it was party night. After the lectures there was a reception in the old town hall. It has recently been restored. The city of Tampere welcomed all the participants to MindTrek week and especially all foreigners. For that reason the chief official of the town, comparable to the function of mayor, had decided to do his speech in English. This short his speech remarkably. After the welcome of the chief official, Mária, the chairperson of MindTrek week, was welcoming all the participants as well, also in English and also short. After townhall we went to Hotel Tammer for an evening of entertainment: jazz by the Gilda jazz band. In another room of the hotel, Chris Hales was entertaining the crowd and getting them involved in interactive movies, letting the crowd decide what was the funniest joke by booing the real bad ones. 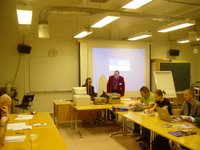 
Today is a complex day. In fact many events are going on. The Vocinet workshop, a project of the Instructors’ Network, will start. It is the second workshop in the series of four. The first one on Digital storytelling has been held in Salzburg and the second one in Tampere is on Project management and design. The workshops are intended for multimedia instructors (teachers, lecturers and professors) to update themselves and exchange methods with other instructors. There is quite a geographical spread present: Poland, Lithuania, Hungary, Germany, the Netherlands, Brits and of course Fins. Although the subject did not look to me to be that sexy, I was surprised by the first two presentations. Frank Alsema, a Dutch new media director of 4M and part of the team of the Blackbeard Connexion cross media game, showed the tension between the creativity and the complex tissue of new media, while Tommy Pelkonen of Santama showed how a middle seized company handles the principles of project management and design. The presentations will be available for registered users of the Instructors’ Network. 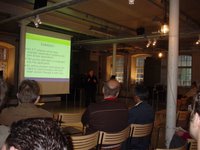 Dutch entrepreneur telling about her company during the MindMarket event


In the meantime the Mind Match between Dutch companies and the Finnish companies was going on. For the entrepreneurs there were presentations of Finnish and companies organised. Some matching work was done beforehand and it looked that this was going to be fruitful. I saw a presentation of one of the Dutch participants, who told the audience about a project she had done with the Dutch Youth Council. It looked like she had brought that institute from the feather into cyber age.
Gepost door Jak Boumans op 2:12 PM