The trip to Helsinki yesterday was very unfortunate, thanks to KLM. We had gotten the advice to check in as a group. So when the group was complete, we checked in and found ourselves at the end of a long queue with only 5 counters manned. Having informed an attendant that we were with a group of 39 people and had to leave within three quarters of an hour there was no reaction, but the remark that we had to be in time at the at the check-in. After that her shift ended and she left. By the time that half of the group had checked in and half were finally at the counters they were told that the gate had been closed. Also the floor KLM management declared the gate closed and 16 people were checked in and could fly, while the rest had to stay behind for the late afternoon flight. I have never seen such rudeness of company that says that it is caring for its customers. So by midnight the whole group was re-united again in Tampere, at the extra expense of two bus coaches instead of one and a ruined welcome dinner. And of course with 39 people who will remember this incident with KLM whenever they book a flight next time. They know that they have a choice to fly with a more courteous airline. 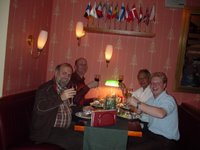 
In the morning we boarded a coach for our first stop: Nokia Research Centre in Hermia, half an hour from Tampere. It took half an hour. With the group we sat in an auditorium , which reminded many of their college years. Juha Kaario started the presentation on Nokia and their research centres around the world and then got into the mobile game research Nokia is doing in Hermia. His colleague went into the subject of serious gaming and especially into gaming in healthcare. There were some remarkable points they brought up. On the platform business the researchers indicated that they are using Linux as middleware language. And I noticed later during talks in the cafeteria that Nokia is preparing a shift on their game distribution policy. Now they sell their mobile phones with games through telephone companies and through third parties like Electronic Arts. But if I sense it right Nokia will distribute games in the future themselves. This will be a major shift for them. Of course they are a brand, but so far telephone companies own the buyers of Nokia equipment. If this presupposition is right, it will mean that Nokia will turn their game research into a commercial activity. 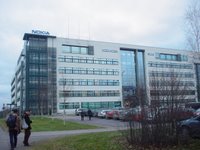 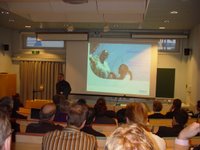 Presently Nokia is involved in a big Integrated Project on Healthcare, dubbed MyHeart, with the European Commission. In the projects games are developed to prevent cardio-vascular diseases and to help people with obesities. It is a project of 15 partners, commercial companies like Philips, but also universities. The basic question is of course: could games be of help in prevention. So far they have produced a game Life for Quest a dungeon multiplayer adventure game with a diet program. The more life forces are gathered, the higher you can go in level. Another game is Sneakers, a location-based collectible and card game. Teenagers are asked to collect items in a diameter of 100 meters, photograph them and put them on their mobile. They can be exchanged with other people and after a while the players gains more terrain to collect items and go from 100 meters to 200 meters. Of course this game is to get teenagers walking. A third game is Peer support, a game for building a virtual community with group features and chat. These games are only exercises for the development of mobile phones with sensors. By having textiles with woven-in sensors, the heart condition can be measured and transmitted by mobile. And why not have a mobile with a step-o-meter?
Gepost door Jak Boumans op 4:02 PM