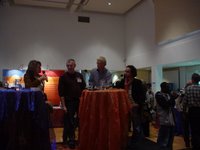 Four weeks ago Peter Olsthoorn (blond man in the middle), chairman of the Internet Journalist section of the Journalists Trade Organisation, remarked at the meeting Fill the Gap III that he was most irritated on Internet by anonymous messages. Yesterday the Dutch High Court delivered a ruling limiting anonymous messages a little bit.

The case in the high Court was brought by Mr Pessers, a professional stamp trader, trading amongst other through e-Bay. Mr Pessers received quite some flack about his way of trading; in an anonymous message on the review site of http://members.lycos.nl/ he got an negative review and was accused of fraud.
Pessers requested the hosting provider Lycos to close the website and pass on the personal data of the author of the review. Lycos refused and says only to deliver the data after being ordered to do so by a judge. Pessers goes to court and wins the first case. Lycos went to a higher court and lost again. Then it brought the case before the High Court which confirmed the ruling.

The ruling puts the interest of Pessers before that of Lycos and the anonymous author of the review, as Pessers will be declared an outlaw for this type of actions. Pessers can now start a rebuttal and a civil court case for damage. ISPs will have to review their policy on privacy now, as they have become liable to court cases concerning anonymous messages.

Some Dutch media claimed that anonymity on the Internet was past time from now onwards. They are misinformed. Never heard of anonymous re-mailers? But the ruling most likely helps a little bit.

The confirmation of the ruling is also picked up by Brein the Dutch piracy watchdog. With this ruling, the watchdog wants to go to court to get the names and addresses of music and video pirates
Gepost door Jak Boumans op 9:00 AM