Recently Eurostat published a report on Internet activities in the European Union. These are the following hightlights:
• 89% of EU enterprises actively used the Internet in 2004; 65% had a website.
• 47% of individuals had recently used the Internet. Those who did so were mainly looking for information and on-line services and used it for communication (e-mail).
• As was to be expected, by 2004 the playing and downloading of games and music was particularly popular amongst 16-to-24-year-olds; at the other end of the spectrum, Internet users of retirement age (65-74 years) frequently account for higher shares than the 55-64 age group.
• In Denmark, Germany, Estonia and Finland, around three quarters of Internet users who were unemployed at the time of the survey were looking for a job or sent a job application over the Internet.
• Internet-based banking activities were fairly widespread and performed by Internet users of all age groups, except for 16 to 24-year-olds.
• Reading and downloading on-line newspapers was a particularly widespread Internet activity in the Baltic States and Iceland. Playing or downloading games was popular in Greece, Cyprus and Turkey, but also in Finland.

The table below provides details of Internet users looking for specific information and on-line services. The category ‘Finding information about goods and services’ generally appeared to be the most widespread activity in the EU Member States, except for the three Baltic states, where ‘reading or downloading online newspapers’ was highest. This activity was also quite widespread in Iceland and, to a lesser degree, in Turkey. 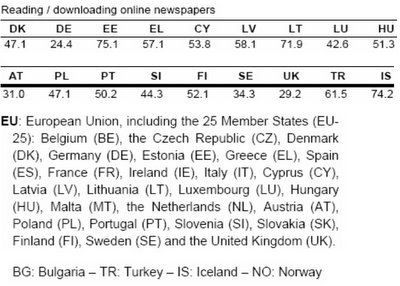