I am going to close the series on Tunis, looking back at the WSIS and the WSA. Was the WSIS the summit of solutions? Did WSA make any impression?

Politics
The WSIS was dubbed the Summit of Solutions. The Dutch ministry of Economic Affairs had indicated that the Summit should address three areas:
a. Governance of Internet.WSIS recognises the effectiveness of the existing arrangements for Internet governance in making the Internet the highly robust, dynamic and geographically diverse medium that it is today. The WSIS recommendation includes a proposal for a new forum for multi-stakeholder policy dialogue - the Internet Governance Forum.
b. Freedom of speech. This subject was a non-issue from the beginning.
c. Bridging the digital gap. In the first leg of the WSIS in Genf (Geneva) the president of Senegal Abdoulaya Wade proposed a special fund. However this fund never came about and was replaced by a private fund, initiated by the city of Genf. But in Tunis no progress was made on the fund nor on the intention of the fund to stimulate bridging the gap.

Our Dutch minister of Economic Affairs Laurens Jan Brinkhorst thuoght that the Summit was successful as after Genf it is realised that Internet is no longer a toy of the rich countries. This observation might be true, but both Summits have cost a lot of money which could have been spent on the infrastructure of an African or Asian country.

So, politically the WSIS has come to an end. The two Summits were not a success nor will they deliver anything concrete, but awareness. In my estimation, this year’s LifeAid has had more effect than WSIS and the 100 dollar PC caught more media attention than the Summit debates.

Exhibition
The exhibition was larger than in Genf. This time more commercial companies participated and tuned their booths and themes to social responsibility and sustainable entrepreneurship. It is good to see that big companies are taking responsibility for the information society.

World Summit Award
- For the World Summit Award the WSIS in Tunis was the end of a two-year process, culminating in the Gala. All the effort of finding national experts, identifying national best-practices, evaluating these best-practices by an international Grand Jury came together at the Gala.
- It was great to see WSA Grand Jury members of 2003: Alexander Felsenberg, Andy Carvin, Suzanne Stein, Jan Bierman, Effat El-Shooky, Marcelo SantÍago, Gagarin Chugaszyan, Osama Manzar, Kresimir Lugaric, Christian Ruppand Grand Jury members of 2005: Manar Al-Hashhash, Alejandro Jaime, Marcelo Hector Petrich, Ilyas Naibov-Aylisli, Cid Torquato, Ana Serrano, Winnie Tang, Helene Abrand, Sepehr Dehpour, Alfredo Ronchi, Rudi Vansnick and Izzeldin Osmanas well as the board members Cai Melaskoski, Gregori Popescu, Paul Hoffert and Christine Maxwell. It was also good to see the team of ICNM with Peter Bruck.
- The Gala was a success with 6 head of states, EU commissioner Viviuane Reding, 5 ministers and 2 UN officials (UNIDO, UNESCO) and ISOC's president Lynn St. Amour. Especially the last presentation of the WSA category on e-Inclusion with South African president Mbeki was impressive. In the plane home, I sat next to two people who thought that Gala was a good performance, presenting best-practices from all over the world. It was hard not to get involved in the discussion.
- The presentation of the book e-Content: voices from the Ground: The Sequel 2 was another milestone. For the second time Osama and his lovely wife Shaifali pulled it off to have the book ready for the Summit.
- WSA as an organisation was able to establish deeper relationships with countries like Egypt, Armenia and Malaysia.
- The good news is also that the WSA will continue, where the WSIS is going to stop. The two years’ cycle will be set in motion again. Croatia will welcome the Grand Jury in Dubrovnik in 2007, while Senegal will host the Gala.
- From Tunis onwards the WSA will start with the Roadshows and Content Summits again. A Summit in Armenia is in the planning already. A roadshow in New Zealand is on the drawing table.
- Christine and myself will work out a proposal to produce a best-practice and case database of the WSA products of 2003 (803 products) and 2005 (742 products). It is a pity to let no less than 1545 products rot in a computer somewhere. 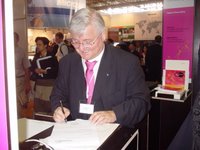 Here I am signing the 40 certificates of the World Summit Award Winners. As for the series of Tunis, I am now signing off (I see now that my tie was matching the colour of the Austrian pavillion)
Gepost door Jak Boumans op 8:00 AM