I have spent my Sunday afternoon reading a thesis of a German student, studying at the Hochschule Mittweida (FH), University of Applied Science in East Germany, behind Dresden, close to the Czech and Austrian border. I have been in Mittweida in June 2004. It is a very small town, of which 40 percent of the population consists of students. And as every university likes to pride itself of a famous scholar, the inventor of the PAL TV standard was an alumnus of this university.

The author of the thesis is a student of Herr Prof. Dr-Ing. Robert Wierzbicki. Robert is a founding father and very active member of the Instructors’ Network. He has set up the website of this network of multimedia instructors and professors. He also organised the Swan Lake Awards in 2004 and 2005, a multimedia competition for the students at the Hochschule, named after the swan pond across the street from the Fach Hochschule. When I was there, it was the first edition of this Award. (It was during one or another soccer championship, when Holland played against Germany; can you imagine a complete hall of Germans against a one Dutchman.) The Award Gala was presented and recorded by people from the television section of the university. 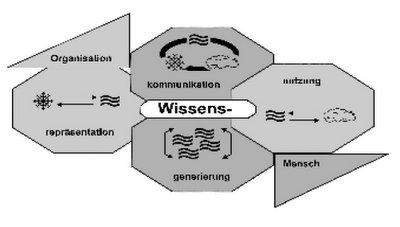 The thesis in the German language contained a nice overview of knowledge management. Many models passed. The nice part of the thesis is that you get other references than you would get in the Netherlands. Usually the theories of some local Dutch guru’s like Wegman are presented, sometimes mixed with some American guru’s. But reading a German thesis you are presented with other authors and models. So I read about the Munich Model, which rests on four pillars: knowledge representation, use of knowledge, communication of knowledge and knowledge creation. This model has been developed by Gabi Reinmann-Rothmeier in the article Wissen managen: Das Münchner Modell (2001). The student combined knowledge management and virtual communities and even mentioned The Well. In the end she applied knowledge management and virtual communities to the Instructors’ Network. She had some worthwhile advice about running and boosting the community.
Gepost door Jak Boumans op 9:00 AM