Analogue radio to disappear in 2015

The Netherlands will be on digital radio by 2015 (I will be 70 years young by that time). All analogue radio signals will disappear and the present generation of radio equipment will be useless.

This decision was made known by the minister of Economic Affairs in a letter to parliament. He first had put the disappear act between 2015 and 2015, but has now firmly set 2015 as the end of analogue radio. With the decision of 2015, the minister is right in line with the UK and Germany, which countries will abolish the analogue radio waves and equipment.

The licenses for digital radio broadcast will be handed out before the summer of 2006. There will not be an auction for the frequencies, but a beauty contest for the present public and commercial broadcasters.

By May or June 2006 the first international negotiations will start. In 2007 or 2008 the next trench of frequencies will be assigned. At that moment parties which are not active in the Netherlands can participate.

I bet the Dutch will switch more than in time. It is a question of commercial radio starting to make the first move. 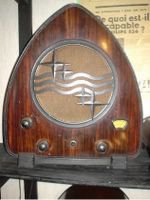 This is the so-called chapel radio, made by Philips. It is part of the collection analogue radio sets of the Belgian Jukeboxmuseum
Gepost door Jak Boumans op 7:30 AM