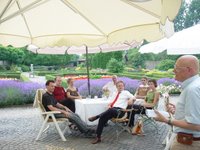 On Sunday I was present at the 10 years jubilee celebration of a Dutch internet press release service, Nieuwsbank/Newsbank, the Interactive Dutch Press Agency. In1996 Jan Halkes (right, standing) started up the service. Jan is a former correspondent for the Dutch newspaper Trouw and a former lecturer at the School for Journalism in Utrecht.

Middle man
Nieuwsbank is a news aggregator. This is a middle man function. Nieuwsbank gets money from companies for the distribution and the management of the press releases, from readers and from advertisement. And so far Nieuwsbank has succeeded to survive.
What is the future for Nieuwsbank? A news aggregator functions within the news column, be it with limitations such as the Dutch language and the text-orientation. The news column includes newspapers, newspaper archives, newswire agencies, documentation services as well as clip and newsletter services. This column is rather conservative and inefficient, IMHO and might move slowly. The business intelligence and the marketing sector will be interesting in the coming years. But in order to bind companies from this sector, not only press releases are needed, but also voices from bloggers. In other words, a new format will have to be developed in the coming year.