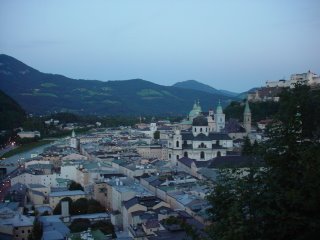 I am back in the Netherlands and have left the mountains around Salzburg behind me (Photograph of Salzburg when evening falls). The mountain view always intrigues me; the highest mole hill we have in the Netherlands is 323 meters (and during my youth I used to live in Arnhem art the foor of the second higesty mole hill of 80 meters). But I am back to my desk and getting through the financial newspaper of the last few days and the local Sunday paper.

The celebration of Sunday and Sunday papers in the Netherlands are the last bastions of christian intolerance in the Netherlands. The Dutch love to talk about 24/7, but due to Sunday regulations, which can differ from town to town shops are either closed or open the whole day. In the city of Utrecht, where we used to live, it was very provincial and conservative, with only one Sunday for shopping. In the new city of Almere it is rather liberal with shops for groceries and amenities open all Sunday, while the central shopping area is open once a month.

Newspapers have been hindered for publishing on Sunday. Having lived in the States and the UK, I have tasted the joy of heavy Sunday papers (in the Netherlands the Saturday newspapers are heavy with weekend sections). But in the Netherlands the phenomenon of a Sunday paper has been thwarted by the christian political parties and the graphical trade unions. More recently the christian parties have become more lenient on the Sunday celebration, while the influence of the graphical trade unions has dwindled dramatically. But up to 2000 a Sunday paper was out of the question. The typesetters would claim a double salary for working on Sunday; this combined with the high delivery costs would make it small beer in business terms. In the nineties it was tried to set up a national newspaper, but the project did not get very far; after a few months the shareholders pulled the plug. In 2004 the newspaper with the largest national circulation de Telegraaf took up the publishing of a Sunday edition, but it is not a real success. Only Wegener followed with a Sunday paper in Twente, am eastern region of the Netherlands. It does not show that there is no need for a Sunday paper; it only goes to show that there is not a tradition of Sunday newspapers. There are many free house-to-house newspapers intended for advertisements sporting the name of Sunday newspaper, but they are delivered on Saturday and will never break the story that our prime minister Jan-Peter Balkenende of the Christian party CDA will divorce (which is not true); the national newspapers would do that on any week day, but not on Sunday, except for de Telegraaf, which has a Sunday paper in place for this type of timely news. 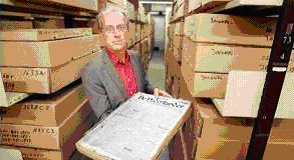 I came to think of the newspapers today as the Dutch national library KB has started a project to digitise newspapers from two centuries ago. They will scan 8 million pages of national, regional and colonial newspapers. The series will start with the Courante Uyt Italien Ende Duytslandt, dating back to 1618. The project will link the digital papers which are archived these days with the newspapers of the past. Many of the newspapers have converted the paper versions to microfilm, but searching in microfilms is a tedious job. In the Netherlands in the late seventies VNU started an experiment with Philips to convert newspaper images to laser disk. But as online and CD-ROM were introduced, newspaper started to build up a digital archive (in the Netherlands we started almost 10 years later with digitising newspapers than in the US, where the NYT already started to digitise in the sixties). So in 2008 we will be able to search online in a newspaper archive of almost three centuries.