A few days ago I saw an announcement from Nokia that it now has a tiny memory card which can be slotted into a mobile phone. Nothing special I thought. But the rumble and sound made around it was different from the usual kettle music. The tiny card can store up to five audio versions of lengthy novels. This sounded more exciting; instead of walking around with a bulgy Sony Walkman and audio CDs, you have them now stored on a memory card. A question, which keeps lingering in the back of my mind, is, whether this card will hold also music. From the press release this is unclear, but it mentions theta the technology was originally developed to store music. 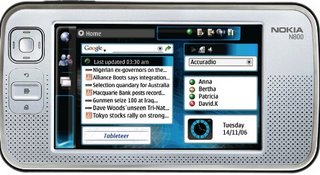 But there is more news coming up from Nokia as it will release another tablet, the Nokia N800. From the press releases and the first photographs of CES it looks to be an all-round tablet, which can be used for internet, as a navigator in a car and even as a games display for the backseats in a car. It is interesting to see that Nokia does not go back to an earlier idea of 2000 of offering books. But Nokia is not a publisher or an audio and/or electronic book distributor. Perhaps the audio books might draw the company into it. 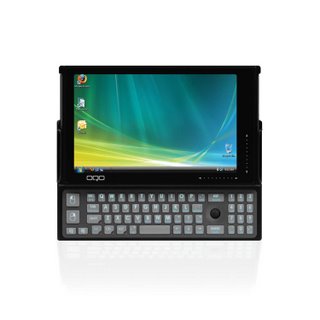 While on the gadget of tablets, I also saw in the mountain of press releases, that Bill Gates demonstrated the new operating system Vista on the smallest hand held computer OQO (see video). I have been following the development of this device, being a gadget freak without a purse. From what I see, I think that it is a smart looking device. But of course, you have to try it out. Again I would like to test it on electronic books. But I would also like to test its WiFi facility; would love to see how Skype would work on this. The price is high, but compared to a laptop with the same specs it is not that expensive.

The conclusion is clear that publishers and book distributors should create a proper infrastructure in order to capture this market while it is opening up. Of course the help of a giant like Nokia could help.