On 25 April 2006, Creative Commons Netherlands launched the ‘CC NL DVD’ project in order to promote Creative Commons. The intention was to acquire at least a dozen songs by different musicians and combine these songs with the visuals of another dozen visual artists. The end result is a DVD filled with audio and video material, all licensed under Creative Commons licenses. The call for music was sent out to numerous websites, people, magazines and communities. 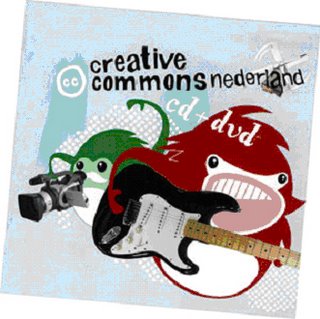 The response was quite successful with over 130 songs from more than fifty different artists. A professional jury consisting of Sander Kerkhof, a music journalist working with the Dutch public broadcaster VPRO and Guno Oosterling, organizer of the ‘Grote Prijs van Nederland’, one of the most well-known music competitions in the Netherlands, selected the twelve tracks. But as the selection was not easy, thirteen tracks were selected eventually. These tracks were put online on the Creative Commons Netherlands website with a request for visuals to accompany the tracks. Last week the Creative Commons Netherlands has published a cd/dvd with music and video clips, which can also be downloaded.

Creative Commons has developed a standardised and computerised system, in which authors of literature, photography, music, film and science can offer their works under liberal conditions. By using the free Creative Commons systems, authors can keep their copyrights, but make their work easily accessible for others.