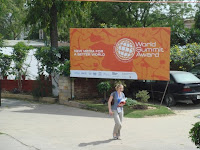 I am in India, at last. It was a hectic trip. The flight was supposed to consist of two legs: from Amsterdam to Vienna and from Vienna to Dehli Airport. Why I had to fly through Vienna is not clear to me, but the flight was arranged by a bureau. But as there was fog at Schiphol the flight to Vienna was cancelled and I had to get a transfer through Frankfurt. The time between the arrival and departure of the flight to India was short, but passengers for India were picked up by a special service and delivered on time at the airplane. (At last a service of an airline, Austrian Airline, that tries hard to get passengers at their destination on time, contrary to for example Czech Airlines). I arrived at 1h00 (local time) in Dehli and expected a long wait at the customs. But that turned out to work fine. But due the cancellation of my flight to Vienna, my luggage was not there. That took a heap of forms and stamps and I was sent off with a emergency sanitary set.

Once I was through the customs I met Anya, the Russian WSA jury member, and Esam, the new Iranian WSA grand jury member. Two people of the Indian government turned up to get us in a cab and drive us to the hotel in Gurgaon, Haryana on the south side of Dehli. By 3h00 I was finally in my hotel room and could take a short nap as we were supposed to be on the bus to the Intercontinental Hotel by 8h30.

It is the first time I am in India. Of course at night you do not see too much of Dehli, except some highways and a lot of multi-coloured trucks. But in the morning it was quite different.
An army of motor cycles had woken up as well as an army of cars and trucks, hooting and whistling along. Unbelievable, the way they drive; yet I saw only one light accident in all the 9 days.

On our way to the summit venue, I was sitting to someone who had been to the Tash Mahal in the days before. She had gone to Agara by taxi and has stayed overnight as she wanted to see the mausoleum by sunset. The marble and the special stones light up in a special way. After that she had returned to Dehli again by taxi on the bumpy road. For me, there is no time on this trip to go to the Tash Mahal. It is a pity, but you never know when you are back again in India. 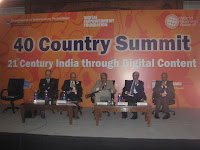 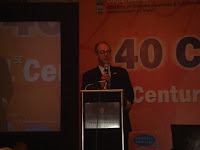 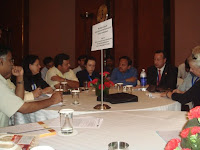 In the Intercontinental Hotel, the summit 21st Century India through Digital Content was held. There were introductory presentations by Indian dignitaries (see photograph top left) and Dr Peter Bruck, the chairman of the World Summit Award (see photograph top right). After the introductions there were three rounds of brainstorming with summaries and recommendations to the government (see photograph below). I picked up a first impression about content in India. It is a country with 1,2 billion inhabitants; many of them are illiterate. Internet is not widespread, but mobile is. So mobile content is wanted badly. The days was closed by Mr. Jainder Singh, Secretary of the Department of Information Technology, Government of India.