The plane left Dehli in time and was on time in Vienna. After going through the ritual of checking in for a Schengen free traffic country, I boarded for Amsterdam. However there was a delay of roughly an hour because of fog in Amsterdam. 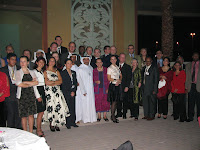 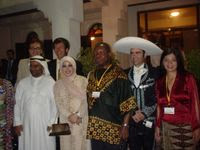 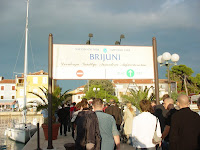 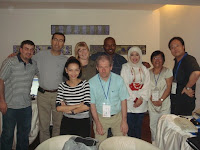 
I had the time to think over the whole Grand Jury project. This was the fourth Grand Jury. Grand Juries were held in Dubai (United Arab Emirates) in 2003, Manama (Bahrain) in 2005, Brijuni (Croatia) in 2007 and New Delhi in (India) in 2009. Dubai was the venue for the first Grand Jury. The organisation in Dubai was perfect: hotel, transport, jury venue and facilities as well as the social agenda. In Manama the organisation was also perfect; there was even a trip to the GP circuit. Brijuni was a heavenly island; pityful, the jurors will keep a painful memory of it. New Dehli was a fast fix. After the 2009 Grand Jury in New Dehli, other countries have indicated that they would like to organise the 2011 Grand Jury. Of course, the event is still two years away and governments might change.

New Dehli was different in many a way. Up to the end of last year the 2009 Grand Jury was supposed to be held elsewhere; in fact our man on the ground Osama Manzar pick it up in a late stage and started to organise the Grand Jury. First Hyderabad was going to be the place, but three months before there was a switch to New Dehli. Yet it turned out to be perfectly organised. The hotel was okay, the Grand Jury venue was at the hotel compound and the computer facilities were okay, despite the breaks in electricity. Also the social agenda gave some idea about India. Altogether, the WSA Grand Juries have been lucky so far with their hosts. And in India we have been lucky to have Osama Manzar and his wife as organisers. Their contacts with government officials helped the organisation of this Grand Jury from departure to arrival at home again. It is clear that India is striving after leadership not only in hardware and software, but also in content. And they have a challenge ahead. As mobile is more common in India than internet, India can be the cradle of mobile content.

Overlooking the 2009 Grand Jury, India has been an exemplary host. Osama and his wife are the heroes, supported by the army of tutors. The WSA staff consisting of Anastasia, Emilia, Cecilia, Angelika, Karin and Pedrag had everything prepared minutely. Of course the corps of jurors was great.